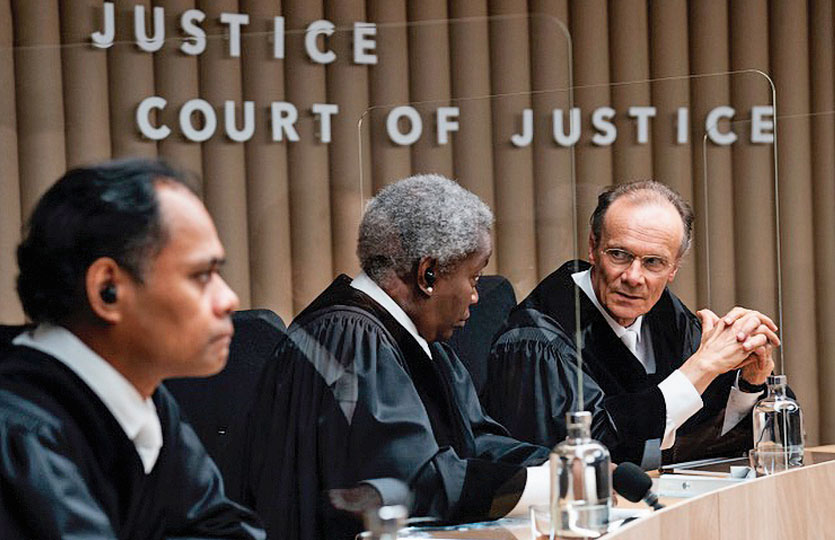 Discussion Panel on Ökozid, a Courtroom Drama by Andres Veiel

As the screening of Andres Veiel's film Ökozid (Germany 2020, 90 min.) ‒ scheduled on 19 Nov ‒ had to be cancelled, the discussion was recorded at the Akademie der Künste. On Nov 10, the following guests got together to talk about the film: Rainer Baake (director of the Stiftung Klimaneutralität / Climate Neutrality Foundation), Jutta Doberstein (author), Alexandra Kemmerer (Max-Planck-Institut für ausländisches öffentliches Recht und Völkerrecht / MPI for Comparative Public Law and International Law, Heidelberg), Andres Veiel (author and director) and, connected from Baden-Württemberg, Dr. Stefan Wolf (chairman of the executive board, ElringKlinger AG and chairman of the SÜDWESTMETALL employers’ association). Moderated by Ulrike Herrmann, economics editor and author).

Among other issues, the controversial discussion touches on what impact the failures of German climate protection policy have had and why it is important to deal with them: Is it even still possible to achieve climate goals by 2050, considering the ever diminishing timeframe? Do we need courts for this purpose, which will commit policymakers to more stringent climate protection? And does it make sense to set fact-based research into the fictional setting of a courtroom drama?

About the film: It is 2034 and the Federal Republic of Germany is in the dock at the International Court of Justice. It is being sued by 31 countries of the global South for not only failing to prevent the rise in CO2 emissions, but for having decisively promoted it through subsidies and regulatory policies. The consequences: global warming, catastrophes, hunger and social unrest. Andres Veiel and co-author Jutta Doberstein establish a fictional tribunal in which missed opportunities are discussed, as is the question of the extent to which individual freedom reaches its limits when the survival of all is at stake.

Ökozid will be broadcast on 18 Nov at 8:15 pm on TV (Das Erste/ARD) and will be available in the ARD Mediathek for three months.

The discussion can be seen here: