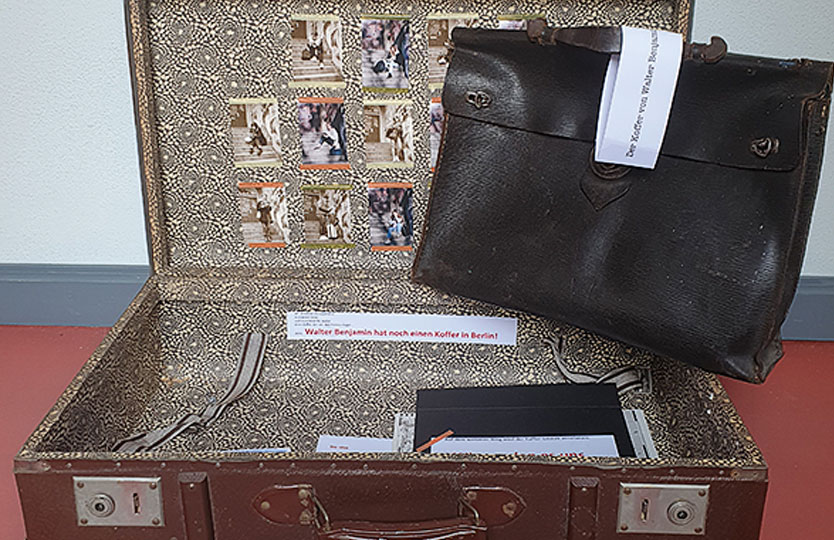 Suitcase by Walter Benjamin – Application for a trip to Portbou. Photo © KUNSTWELTEN

ON MY WAY – Stories from Europe

The exhibition on travel and its relationship to the arts has had to remain closed to date but can now be experienced as a video tour by director Nataša von Kopp and cameraman Hans Przybilla. Pictures, film and radio play excerpts, music pieces, models and objects created by pupils from several European and German cities can be seen and heard. Together with artists from the Akademie der Künste, they tell of desired and forced journeys in Europe. Reports from far away stand next to those from their immediate surroundings, even from their own rooms. Pupils from Berlin follow Walter Benjamin’s escape route from the National Socialists to Portbou in Spain, pupils from Prague go in search of traces of John Heartfield’s exile in their city. A music excursion takes children from Bitterfeld to a lake near their school, and young people from Kuressaare and Wolgast develop solutions for sustainable tourism on the Baltic coast, which they present in models, drawings and plans. Inspired by Anna Seghers’ radio play Ein ganz langweiliges Zimmer (A Very Boring Room) written in 1938, children talk about the everyday objects and favourite things that surround them, giving them a chance to speak about and record their feelings on having to stay in their “boring rooms” during the coronavirus pandemic. Girls and boys from Köthen learn how to appreciate light and shadow through intensive observation and – in the style of Carl Blechen – how to draw with sepia. Secondary school students, also from the Anhalt-Bitterfeld district, made a road movie at the beginning of the coronavirus pandemic, and children from Germany and Greece talk about their experiences and dreams in a travel film. A series of films captures the atmosphere in Bitterfeld-Wolfen and Madrid and sends greetings from children in both cities.

This cooperation with the Goethe-Institut leads from Bitterfeld out into the world and invites cross-border exchange within Europe, even during the pandemic. With Annesley Black, Gesine Bey, Michael Bräuer, Kerstin Hensel, Nataša von Kopp, Mark Lammert, Jeanine Meerapfel, Kleopatra Markou, Franziska Pflaum, Irina Raud, Benjamin Scheuer, Erdmut Wizisla, Elena Zieser and many others.

The seven UN rescue tents originally planned as exhibition architecture were donated to the PIKPA camp on Lesbos, Greece. Pupils from Bitterfeld-Wolfen and Köthen sent their greetings to the children of the Pikpa camp on the occasion of the handover. The independent camp was evicted at the end of October by order of the Greek government. The staff continue to provide support to refugees on Lesbos.

The exhibition is supported by:

The exhibition about travelling invites young people to engage in cross-border exchange within Europe. The exhibition has had to remain closed to date but can be accessed as a video tour. Pictures, film and radio play excerpts, music pieces, models and objects by school pupils from European and German cities can be experienced. In German.