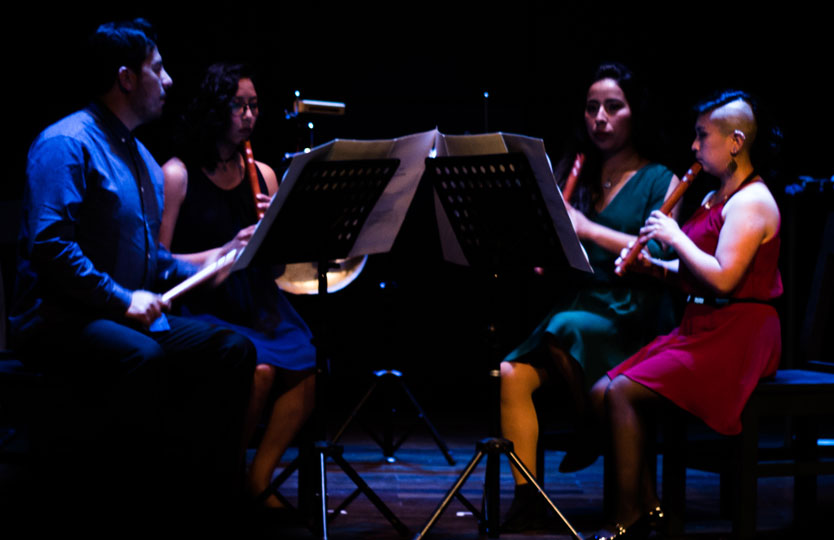 (New version with live performance for the outdoor area of the Akademie der Künste, 2021)

In a live multi-disciplinary cross-fade of experiential worlds, involving mechanical instruments, costumes, video images evoking nature, drums, guitar, movement and mise en scène, drummer Tony Buck creates a scenario in Unearth in which he ritually brings together excavations of his practice as an artist.

Using four themes – creation myths, invasion/migration, technology and incarnation – Bolivian composer Carlos Gutiérrez explores the relationship between so-called civilised and primitive societies in sound, text and movement, and fundamentally challenges the notion of the supposedly prevalent separation of nature and culture among the colonisers as opposed to indigenous societies.

„The work is made up of four thematic parts, each of which explores, based on relationships of image, text and sound, different forms of tensions and influences between the so-called civilized and primitive societies:

“Interpreting what a people thinks of a certain ‘thing’ implies a previous category of ‘thing’ already being given. Thus, it is necessary to take a step back to ask what things are. Viveiros de Castro, for example, postulates, instead of a ‘multiculturalism’, a ‘multinaturalism’. The first involves the idea that nature is one and what varies are the cultural perspectives of people. It is possible, however, to reverse the question: Can there be many natures? [Philippe] Descola, another of the relevant authors of this trend (Ontological Turn), speaks of various ontologies (naturalism, totemism, animism, analogism), each of which raises different continuities and discontinuities between the physical world and interiority. Thus, for example, the naturalism of modern European societies marks a strong discontinuity between these two fields from the beginning, a rift that simultaneously entails a hierarchical distinction between nature and culture.” (Carlos Gutiérrez)