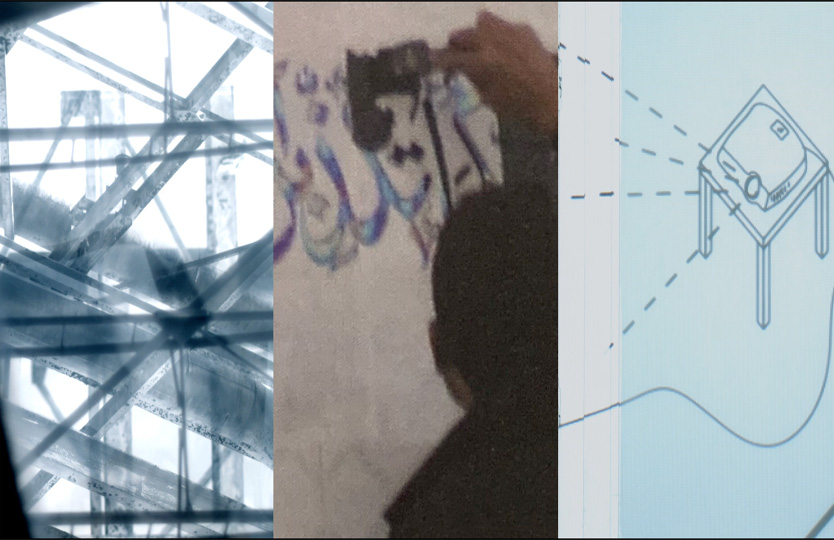 For the digital Open Studios by the JUNGE AKADEMIE, fellows Philipp Valente (Architecture), Nida Mehboob (Film and Media Arts) and Jennifer O'Donnell with Jonathan Janssens (Architecture) present current works-in-progress and topics such as book projects and installations they have worked on at the Akademie der Künste spaces in the Hansaviertel this spring 2021.

In the Shadows of an Industrial Landscape
Philipp Valente used his residency to continue his research on the aesthetics of the industrial landscape. The materiality and structure of industrial buildings have always attracted and inspired architects and photographers. His work attempts to explore these architectural means and specify their characteristic qualities. It is not just a matter of identifying or preserving these structures but of updating and translating them to the present day in a coherent way. It is about questioning capitalist development of regional structural transformation and developing bold ideas that will effect change.

Images of the Unseen
The film maker and photographer Nida Mehboob works on designing and printing a photo-book called A survival guide for Ahmadis in Pakistan. This is a sarcastic take on the persecution of a religious minority, using images, text and archives. Borrowing aesthetics from traditional survival guides, this book explores the history of persecution and discrimination faced by this community in daily life while maintaining the anonymity of the subjects using staged photographs.

Drawing for Foxes and Cross-country Skiers
Jennifer O'Donnell undertakes a period of extended focus into the development of her drawings as a fundamental part of her creative practice. In particular, she investigates the medium of survey drawing with the aim of developing new applications and interpretations of this measured, familiar mechanism for interpreting the world around us. In response to the special situation of an artist residency in Lockdown and in acknowledgment of what would have been the 100th birthday of the architect Werner Düttmann, who designed their temporary home, she decided together with the architect Jonathan Janssens to draw the spaces of the atelier, as well as their lives within it. In support of the practice of open studios, even in corona-times, they project the finished axonometric survey drawing onto the studio window, creating a 3m x 3m glowing box within which the drawing, now animated, draws and undraws itself, the active drawing signalling the act of drawing going on within.