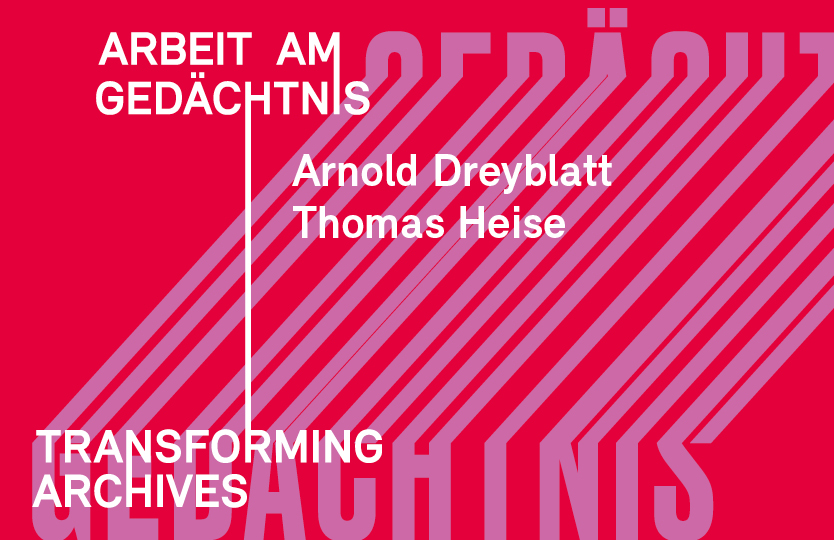 Arnold Dreyblatt and Thomas Heise have dug deep into the Archives of the Akademie der Künste. With their extensive research projects, the visual artist/composer and the filmmaker/author deal in different ways with the Akademie’s substance and history.

Dreyblatt’s investigation into the archives aims to suspend the hierarchies of arts and materials. Heise’s questions, on the other hand, seek to uncover buried and repressed history. In his talk, Dreyblatt explains his process-oriented media installation entitled Archive Carousel, which is structured with musical scores and random operations and is based on John Cage’s deconstruction of the exhibition apparatus.

Thomas Heise shows and discusses impressions from his spatial installation, constructed in collaboration with graphic artist Grischa Meyer and cinematographer Peter Badel: an archaeological excavation site full of artefacts and documents pertaining to the “Corresponding members” of the Akademie der Künste (East) that occupies the intersection of museum presentation and stage production.

With Arnold Dreyblatt (installation and performance artist, composer) and Thomas Heise (Author and Director for theater, film, and radio play)

Arnold Dreyblatt is an installation and performance artist, composer and musician; he lives and works in Berlin. Since 2007, he has been a member of the Akademie der Künste, Berlin, Visual Arts Section. He has taught at the Kunsthochschule Berlin-Weissensee, the Center for the Arts, MIT (Cambridge, Boston), the Hochschule der Bildenden Künste Saar (Saarbrucken) and the University of Lüneburg, among others. Since 2009, he has been Professor of Media Art and Fine Arts at the Muthesius University of Fine Arts and Design, Kiel. Arnold Dreyblatt focuses his media and archive-based installations on cultural memory and, in doing so, transcends the boundaries between new and traditional media.

Thomas Heise is an author and director for theater, film and audio play. He attended a general polytechnic secondary school in Berlin (GDR), apprenticeship as a skilled worker for printing technology. After his military service, he worked as an assistant director, completed his Abitur (school leaving certificate) and then attended the GDR Academy for Film and Television before dropping out as a result of operational targeting by the GDR Ministry of State Security (operation codename “School”). Since 1983, he has been a writer and director of film, radio and theatre, while also working as a cinema ticket attendant, ice cream vendor and dishwasher. He was a master student at the Akademie der Künste of the GDR. He is a member of the Berliner Ensemble and the Akademie der Künste, Berlin. He is also a Professor of Art and Film at the Academy of Fine Arts Vienna and, since May 2018, has been the director of the Film and Media Art Section of the Akademie der Künste, Berlin.