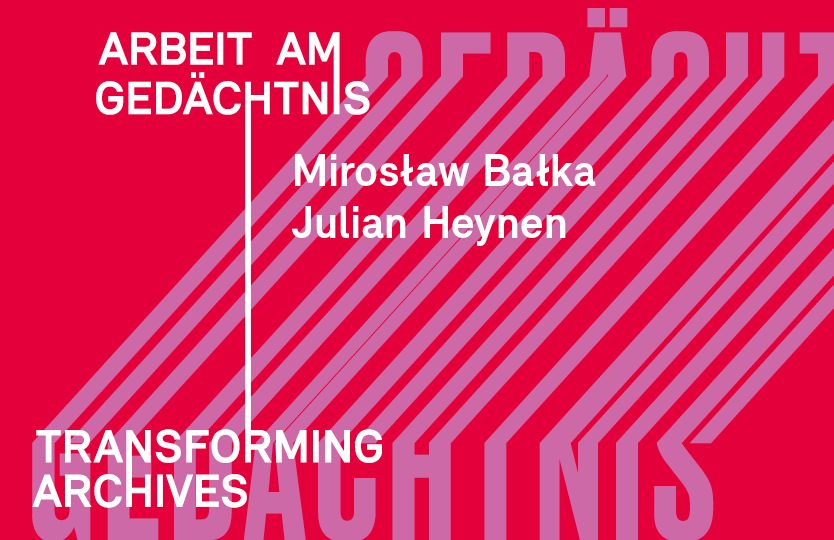 The studio as archive, the archive and one’s own voice as material – these are the themes of the sculptor Mirosław Bałka, on display not only in the sound and video installations for the exhibition “Arbeit am Gedächtnis – Transforming Archives”. Using a German schoolbook found in Bałka’s family archive as a starting point, these installations deal with the collective experience of ruptures in the history of Poland. The author and curator Julian Heynen, who has long been familiar with Bałka’s work, speaks with the artist about his memory work: The past is physis and physis is the past – and thus the present; documentation is bearing witness – and thus interlinkage and entanglement.

Mirosław Bałka lives and works in Otwock, Poland, and Oliva, Spain. He is a sculptor who is also active in the field of experimental video and drawing. He has run the Studio of Spatial Activities in the Faculty of Media Art in Warsaw since 2011. Between 1986 and 1989, he established the artistic group Consciousness Neue Bieremiennost with Mirosław Filonik and Marek Kijewski. He was awarded the Mies van der Rohe Stipend by Krefeld Kunstmuseen. He has been a member of the Akademie der Künste, Berlin, since 2010. Mirosław Bałka has participated in major exhibitions worldwide including the Venice Biennale (1990, 2003, 2005, 2013; representing Poland in 1993), documenta IX, Kassel (1992), Sydney Biennale (1992, 2006), The Carnegie International, Pittsburgh (1995), Sao Paulo Biennale (1998), Liverpool Biennial (1999) and Santa Fe Biennale (2006).

Julian Heynen is a curator and writer specialising in contemporary art. He has worked with and wrote about artists such as: Bruce Nauman, Katharina Fritsch, Franz West, Juan Muñoz, Richard Deacon, Thomas Struth, Zvi Goldstein, Miroslaw Balka, Rosemarie Trockel, Stan Douglas, Gerhard Richter, Thomas Ruff, Candida Höfer, Martin Kippenberger, Tino Sehgal, and many others. Heynen was director of exhibitions at Kunstmuseen Krefeld and until 2016 artistic director of K21 Kunstsammlung Nordrhein-Westfalen in Düsseldorf. In 2003 and 2005 he was the commissioner of the German pavilion at the Venice Biennale, and in 2008 co-curator of the Shanghai Biennale. In 2017 he curated the Georgian pavilion at the Venice Biennale. Participated in TV program “Bilderstreit” from 2007-2011.

At Pariser Platz and as live stream