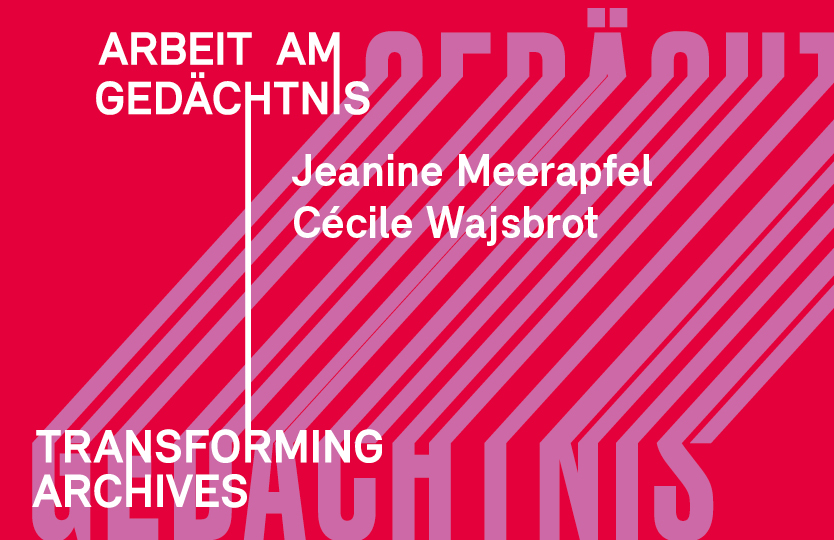 Going Through the Heart. An Introduction

Cécile Wajsbrot’s dystopian novel Zerstörung (Destruction) explores the fear of history repeating itself and the consequences that the eradication of cultural memory and private memories can have on human existence. For her contribution to the Akademie’s main programme “Arbeit am Gedächtnis – Transforming Archives”, she explores the estate of Imre Kertész in the Archives of the Akademie der Künste. Jeanine Meerapfel’s films can be read as an archeology of social and emotional relations that overlap biographical and socio-political narratives. With short excerpts from Im Land meiner Eltern (In my parent’s country) (1981) and her current film project Eine Frau (A Woman) she invites Cécile Wajsbrot to an interdisciplinary dialogue on the role that remembering and forgetting play in their respective artistic work, and how the view of the past defines the future.

Before their talk, Johannes Odenthal and Werner Heegewaldt will introduce the Akademie der Künste’s major exhibition project with its focus on the artistic examination of memory and archives.

Cécile Wajsbrot writes novels, essays and audio plays. She translates from English (including Virginia Woolf) and German (including Marcel Beyer and Peter Kurzeck) and lives alternately in Paris and Berlin. She has been a member of the German Akademie für Sprache und Dichtung since 2017 and of the Akademie der Künste, Berlin since 2019. Her novels often focus on the Shoah in Germany and the silencing of it. Her latest novel Zerstörung (2020) tells of the annihilation of cultural memory in the form of a futuristic novel. Some of the awards she has received include the Prix de la Fondation Bernheim (2020), the Prix de l’Academie de Berlin (2016) and the Eugen-Helmle-Ubersetzerpreis (2014).

Jeanine Meerapfel has been president of the Akademie der Künste since 2015. The filmmaker and screenwriter has made numerous award-winning documentaries and feature films, among them the documentary Im Land meiner Eltern (In the Country of My Parents) (1981) and the feature film Der deutsche Freund (My German Friend) (2012). From 1990 – 2008 she taught film at the Kunsthochschule für Medien Köln. Jeanine Meerapfel has been awarded the Federal Cross of Merit 1st Class in 2020 for her success as a filmmaker and author as well as her commitment to human rights, freedom of speech and equality and diversity of cultures. Recently she has completed the filmic essay Una Mujer (A Woman). The film will be released in the cinemas at the beginning of 2022, it covers issues such as emigration, remembrance and forgetting.