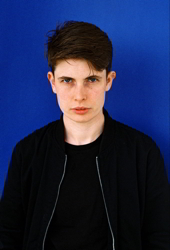 Originally from the UK, Elie Gregory studied Composition at Birmingham Conservatoire and moved to Berlin in 2009. In September 2017, they will be graduating with a master’s in ‘Elektroakustische Musik’ from the Hochschule für Musik Hanns Eisler where they have been a student of Prof. Wolfgang Heiniger. Through the master’s program and Klangzeitort, there have been numerous opportunities for multichannel performances of electroacoustic works, which have both given a platform to and been instrumental in the realisation of the complexity and intricate nature of Gregory’s work. Several multichannel pieces having been performed at various concert venues and festivals, as well as being aired on national radio.