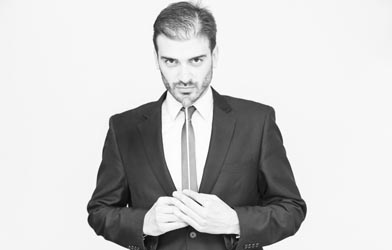 Conductor Fernando Bustamante was born in 1986. His passion for orchestral conducting led him to study in Spain, Luxembourg, and at the Berlin University of the Arts under Steven Sloane and Harry Curtis. He has taken part in masterclasses with Miguel Romea, Andrés Salado, Leo Brouwer, Catherine Larsen Maguire, John Carewe, Kimbo Ishii, Arthur Fagen, and Michail Jurowski. As an instrumentalist, he has performed and toured with various chamber groups and orchestras around the world, and has achieved great critical acclaim and success. Since 2011, he has served as the music and artistic director of the Ciudad de La Mancha Orchestra in Spain, and he has also conducted the Extremadura Symphony Orchestra, Verum Symphony Orchestra, Opus 23 Orchestra, Brandenburgisches Staatsorchester Frankfurt, Neubrandenburger Philharmonie, Brandenburger Symphoniker, Staatstheater Cottbus Orchester, Preußisches Kammerorchester, Magdeburgische Philharmonie, and Ensemble ilinx.