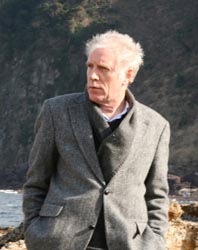 Hans Peter Kuhn, a composer and artist, lives and works in Berlin and Amino (Kyoto, JP). His light and sound installations are exhibited in many museums and galleries or on public sites worldwide, such as the Museum of Fine Arts Boston, Centre Pompidou Paris, Neue Nationalgalerie Berlin, Seattle Art Museum, Tokushima Modern Art Museum, amongst others. Internationally acclaimed are light installations in public places, such as: The Pier, New York, 1996; A Light and Sound Transit, Leeds (UK), 2009; Vertical Lightfield, Singapore, 2009; Acupuncture, Mattress Factory Museum, Pittsburgh (US) 2016; Martin-Gropius-Bau, Berlin (DE) 2017. The installation Memory Loss by Robert Wilson and Hans Peter Kuhn was awarded the Golden Lion in Venice in 1993. He has worked for theatre with directors including Luc Bondy, Claus Peyman, Peter Zadek, Peter Stein, and is best known for the music and sound environments he created in the long-term collaboration with Robert Wilson. He composed music for dancers such as Laurie Booth, Dana Reitz, Suzushi Hanayagim, Sasha Waltz, and Junko Wada. For this, he received the Bessie Award, New York, and the Suzukinu Hanayagi Award, Osaka. Hearing and listening are the themes of his performances which are shown worldwide. Since 2012, he has been Guest Professor for Sound Studies at Berlin University of the Arts.