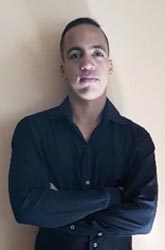 Jorge Denis Molina graduated in violin and later in composition at the University of Arts of Cuba (ISA) where he received several awards and was part of various ensembles. Molina is currently a professor at the University of Arts of Cuba, a specialist at the Laboratorio Nacional de Música Electroacústica in Havana, Cuba, and has been playing with Tropicana Orchestra since 2010. He has taken part in festivals such as Festival de Música Contemporánea, and his Yemayá en Cojímar premiered at the National Museum of Fine Arts of Havana last February.