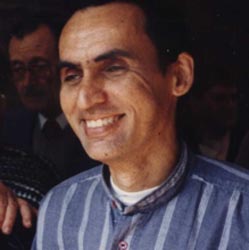 Juan Piñera studied music in Cuba. A composer, musical advisor and professor, he has taken part in music events in Europe, the United States and Latin America. Il Piacere, Amor con Amor se paga, and La Taza de Café stand out among the pieces he has written for the stage. He also works for various dance companies such as Danza Contemporanea de Cuba, Conjunto Folklorico Nacional, Danza del Caribe, Danza Combinatoria, and the Ballet Nacional de Cuba, whose director, Alicia Alonso, has requested two ballets from him. Piñera has created music for orchestra, soloist instruments, teaching, radio, TV and cinema, as well as songs, chamber and choral music. He also writes and directs specialized music radio programmes with the aim of spreading contemporary or little-known music.