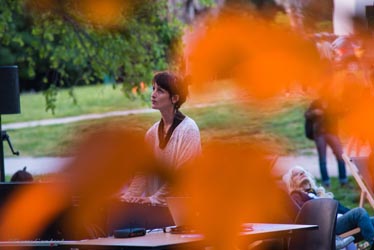 Loïse Bulot started her career as a visual artist, thus her work builds a universe through visual arts and music: hybrid electroacoustic and mixed compositions. Poetically exploring the complexity of unheard phenomena into sound, Bulot creates a fascinating interplay of discrete sonic textures with changes from pointillistic patterns to more extended ones. Having studied the piano and the graphic arts in Paris, she continued her studies at the School of Fine Arts and then at the Academy of Music (CNR) in Marseille, where she was awarded the SACEM Prize for electroacoustic composition. The artist develops her work around various projects: electroacoustic and mixed compositions, live performance, drawing, comic strips, and participative workshops.