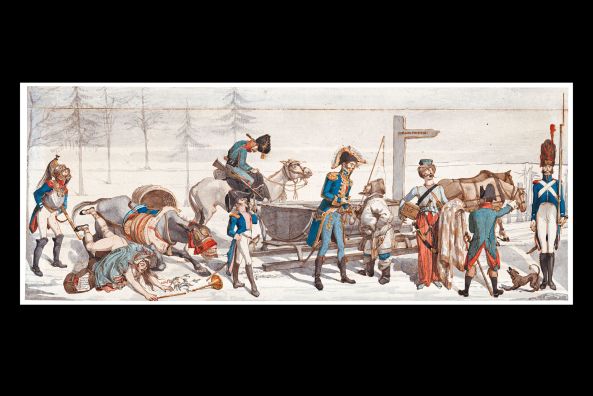 Berlin: 200 years ago. In the winter of 1813, the city, under occupation by French troops, receives the news that the Grande Armée has been defeated and that Napoleon has retreated from Russia. Scattered soldiers move through Berlin, ragged, emaciated, and maltreated. Their faces show the horror and misery of the lost war. The mystique of the unvanquishable conquerors, masters of half of Europe, seems finished. Driven out by Cossacks, in March 1813 they are finally forced to leave the Prussian capital for good. In response, the counterattack is formed. Prussia and Russia forge a treaty of friendship. On 17 March, the Prussian king publishes the appeal An mein Volk (“To my people”) in which he exhorts his subjects to join the fight against Napoleon. Previously suppressed, criticism of French domination becomes loud and widespread. Mockery and hatred of the occupiers spills out in biting satires that quickly reach a wide public.

In April 1813, on the request of the publisher Caspar Weiss, Johann Gottfried Schadow draws two caricatures of Napoleon and his army: La Retraite de la Renommée (“The Retreat of the Glorious One”) and Le Déjeuner à la Fourchette (“Dinner with Forks”). In less than a month they are in print, but in a version that contains ironic commentary added after the drafts. The trenchant satires show Schadow as a virtuoso draftsman and unerring caricaturist, in marked contrast to the plethora of crude cartoons that were then fashionable. In detailed snapshots and impressive figure studies, he depicts the pretension and the reality of the Napoleonic army. His stark visual language exposes the arrogance and conceit of the defeated general, of whom French military propagandists had been claiming, as recently as December 1812, “His Majesty’s health has never been better.” The artist’s personal experiences play a major role in the work. As a citizen and property-owner in Berlin, Schadow not only suffered from the harsh taxation imposed by the occupiers but also experienced the reality of forcible billeting of French troops in his house and studio. He also had to watch his Quadriga statue be removed from the Brandenburg Gate and taken as a trophy of war to Paris.

La Retraite de la Renommée shows the emperor’s flight from Russia. Dramatically and caustically, Schadow creates a scurrilous visual narrative in which the main characters are introduced almost in passing. Within a hazy winter landscape we see a strange horse-drawn sledge, a wooden trough on skids, not unlike half a coffin, surrounded by a crowd of people of strange bearing and clothing. A signpost points to Posen, a province in Poland, a land the French characterised as barbaric and uncivilised, but on whose goodwill their retreat now depends. In front of the sign, an officer in gold--encrusted parade uniform bargains over the onward journey with a fur-clad Polish wagon driver. Despite his stature and magnificent costume, it is clear who has the real authority here. Napoleon can be seen near the right-hand edge. His back is turned but his figure and bicorne hat are nevertheless unmistakeable. With an energetic gesture he demands that the journey continue. He ignores a small dog that yaps at his heels and that is, according to the caption, the voice of the people. The emperor is flanked and towered over by both his loyal Mamluk bodyguard Roustam Raza and a soldier of the guard. Their mimicry makes the tragicomic nature of the situation clear. The climax of the satirical scene is Madame la Rénommee, who wears a headdress decorated with the colours of the French flag. As an allegory of the defeat of the celebrated army, she falls when her mule stumbles. Laurels and a fanfare trumpet lie broken on the floor. Her skirts ride up to reveal naked and unfamiliar facts: the glorious Grande Armée has been beaten into the ground. The caption, in French, makes this even clearer. Madame “Glory” is beginning the menopause. The soldiers around her nevertheless ignore this message and look pointedly the other way. Unworried, an infantryman pulls out his lorgnette and gazes, bored, into the distance.

Its pendant picture Le Déjeuner à la Fourchette shows the battered remains of the imperial army in their bitter struggle for survival. Two ragged soldiers have made a fire out of the wreckage of an army waggon and are grilling a horse’s skull over it. They are barbecuing two rats and a dog, skewered on bayonets, while two soldiers in women’s dresses and shoes made of straw fight the cold, gnawing on meagre bones. Their comrades react with disgusted grimaces, though this does not stop them from butchering a horse of their own.

Both pictures are outstanding examples of Schadow’s graphic work. The rare caricatures were in a private collection until they came up for auction in Berlin earlier this year. The Academy has managed to acquire La Retraite de la Renommée for its art collection. The purchase was made possible by the generous support of the Society of Friends of the Akademie der Künste, the Ernst von Siemens Art Foundation, and the Cultural Foundation of the German Federal States. Its companion piece will be preserved in the Metropolitan Museum of Art in New York.

The new acquisition is an important addition to the art collection. Johann Gottfried Schadow, the founder of the Berliner Bildhauerschule (Berlin School of Sculpture) movement and a central sculptor of classicism, left behind major sculptures and, with over 1,200 drawings, by far the largest holding of works on paper. However, this did not include any caricatures. This gap has now been filled.


Author: Werner Heegewaldt, Director of the Archives of the Akademie der Künste, Berlin.

The image:Johann Gottfried Schadow, La Retraite de la Renommée (“The Withdrawal of Napoleon”), 1813. Watercolour over quill in brown and brush in grey on vellum, 15.4 × 39.3 cm. The printed version from 1813 by Gaspare Weiß und Comp. Berlin has a caption in French that comments ironically on the events (from left to right, translated into English): Observation and consideration | The luminary reaches the menopause | Misstep of the imperial mule | Escort of the light cavalry | Cadre of prospective infantry regiment | The disastrous vehicle| Excellence and servitude | In Egypt it is too warm, in Russia too cold | Back view | The people’s voice | Hope