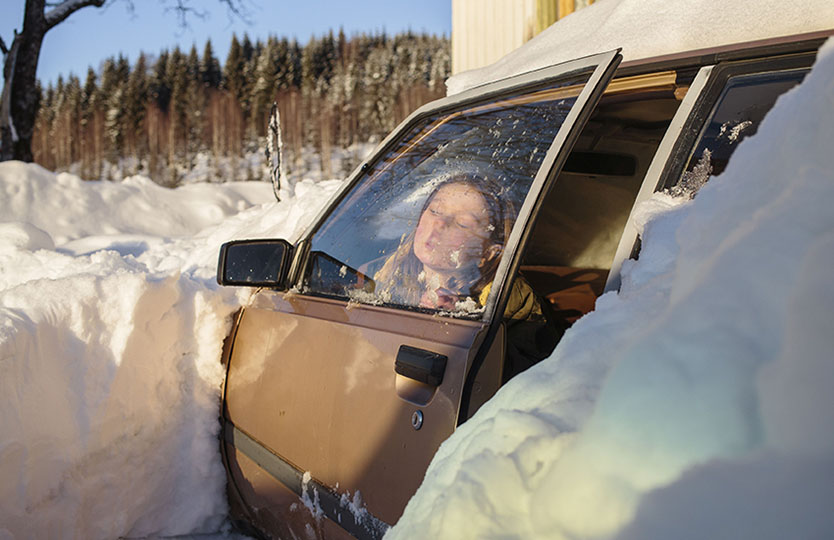 CONTINENT – In Search of Europe

For the first time, the renowned photography collective OSTKREUZ – Agentur der Fotografen has produced a podcast series to accompany its next group exhibition “CONTINENT – In Search of Europe”. From now on, one of 22 episodes will appear twice a week – on Mondays and Thursdays. In conversation with journalist and author Anja Maier, the photographers reflect on their work in the exhibition, which will be on view at Akademie der Künste am Pariser Platz from 2 October 2020 until 10 January 2021.

In the first podcast episode, the curator of the exhibition, Ingo Taubhorn, talks about the collective project’s beginnings and conceptual foundation (episode in German only).

In the second episode photographer Stephanie Steinkopf talks about the protagonist of her series “Virpi”, which will be on display in the exhibition “CONTINENT – In Search of Europe”. Virpi is a Finnish woman who had a burnout and now suffers from depression and alcoholism (episode in German only).

For the exhibition, Maurice Weiss photographs traces and remnants of the Second World War in his series “Si jamais ils reviennent” (“In case they come back”) – in the landscape and in the biographies. In episode 3 of the podcast, he talks about his encounters with remaining contemporary witnesses. As a European and photographer, he is always concerned with responsibility (episode in German only).

In “The Most Powerful Witch from Europe”, Johanna-Maria Fritz photographs the most powerful witch in Romania, Mihaela Minca, and her daughters. In the fourth episode of the podcast, the photographer reveals what their everyday life looks like, how they use their magic and why they never do it in the morning (episode in German only).

In “The Helpers”, Annette Hauschild shows those activists who are working for refugees at the internal and external borders of Europe. In episode 5 of the podcast she focuses on her role as a photographer between responsibility, her own photographic demands and individual risk (episode in German only).

In his work “For Unto Every One That Hath Shall Be Given” Heinrich Holtgreve condenses a feeling of inequality. In episode 6 of the podcast, the OSTKREUZ photographer tells how he came to Gibraltar, where he photographed the project and how he became a political person in recent years (episode in German only).

For the exhibition Harald Hauswald travelled from London to Istanbul by Interrail. In episode 7 of the podcast, he explains why he photographed with a smartphone for his work “Railroad Ticket – Tracking the Orient Express” and what influence this decision had on his photography (episode in German only).

Jordis Antonia Schlösser portrays a young Jewish generation in Eastern Europe. In podcast episode 8 she tells how the young people set out on a search for their own identity and why she has been accompanying this theme for decades as a photographer (episode in German only).

For the exhibition and his work “La Rada di Augusta” Sebastian Wells set out to search for European oil deposits. In episode 9 of the podcast, the OSTKREUZ photographer talks about his approach to such a difficult subject and the subtle danger lurking in his pictures (episode in German only).

“CONTINENT – In Search of Europe” reflects the 22 OSTKREUZ members’ exploration of current aspects of coexistence in Europe. Their photographs shed light on personal, societal and political phenomena. The podcast presents an opportunity to become familiar with the agency’s photographers and their positions in advance of and during the exhibition. They offer insight into their approaches to the highly diverse individual projects. In the podcasts, agency members explain how and why they chose a particular photographic theme, what difficulties and opportunities arose in the process, and how this has changed their view of the European continent. What responsibility do photographers have today? What is their stance? What role do they play as individuals and as representatives of their profession – in society, in an exhibition context and in the media as well as in the collective? The OSTKREUZ members not only address their careers and the way they work; these compelling conversations reveal a critical approach to photography that OSTKREUZ has represented for 30 years now.

All podcast episodes are available free of charge (in German only) through the following streaming services: Spotify, Apple Podcasts, Deezer

OSTKREUZ – Agentur der Fotografen was established by seven photographers in 1990, just after the wall fell, in East Berlin, in a Germany that had not yet undergone unification. Today, 30 years later, OSTKREUZ is Germany’s most renowned collective of photographers. Its 22 members have received numerous awards for their independent stance and signature styles. Their images have been featured in national and international exhibitions, magazines and journals.

“CONTINENT – In Search of Europe” will inaugurate this year’s EMOP Berlin: European Month of Photography and the EMOP Opening Days, beginning on 1 October 2020. The exhibition is supported by the European Fund for Regional Development (EFRE), the Senate Department for Culture and Europe and the Society of Friends of the Akademie der Künste.

All podcast episodes are available free of charge (in German only) through Spotify, Apple Podcasts, Deezer