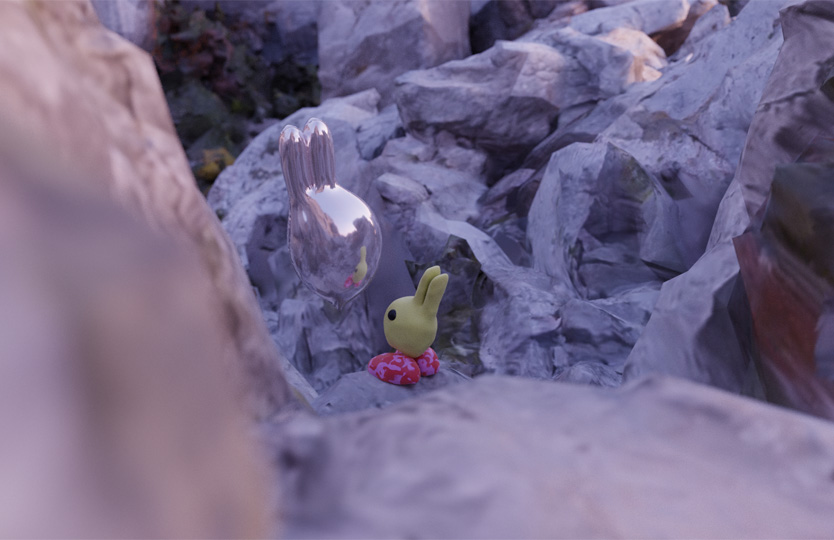 This collaborative exchange between Alan Butler and Simone C Niquille interrogates the technical and socio-political implications of computer-vision technologies. A simulation of an extreme weather report of a never-ending storm is interrupted by duckrabbit – the star of an animated TV series – who tells their queer coming-of-age story. Roaming through California’s Yosemite National Park, the news reporter screams My First Summer in the Sierra (1911), an account of ‘nature writing’ by John Muir, in defiance of the storm, while duckrabbit ponders their desires for ambiguity in a world composited and remade with CGI assets. As these worlds begin to collide and blur, their uncanny representations come apart at the seams. Questioning the gaps between the realities generated by CGI and simulation technologies and their high-resolution capturing of the present, the exhibition asks how we hold together when the line between impending doom and entertainment becomes unclear. Or So It Seems features the premiere of two new video works by Alan Butler and Simone C Niquille.

The 36th edition of transmediale festival takes place at Akademie der Künste, Hanseatenweg, and various locations throughout Berlin from 1 to 5 February. The five-day festival – a model, a map, a fiction – explores how scale reconfigures relations, politics, and affects.

Alan Butler explores material and philosophical ideas about how imagery and meaning function in technologically mediated realities. He is a member of the collective ANNEX who represented Ireland at the Venice Architecture Biennale 2020.

Simone C Niquille is a designer and researcher based in Amsterdam NL. Her practice, Technoflesh, investigates the representation of identity and the digitisation of biomass in the networked space of appearance.

€ 6/4, free admission for under 19s, Tuesdays and every first Sunday of the month