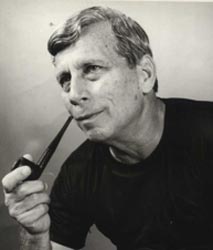 Born in Mariel, Cuba, in 1919, composer Juan Blanco is the pioneer of electroacoustic music in his country. He graduated from the Conservatorio Municipal de Música de La Habana with a degree in composition. In 1961, Blanco began to work with electroacoustic techniques. He produced more than 200 works, including compositions for symphonic orchestra, and for diverse instrumental and choral groups, electroacoustic and computer music, multimedia, and music for dance, theater, and film. He has composed outdoor music for rural and urban areas which explore spatial aspects of sound, and indoor ambience music for public spaces, hospitals, and hotels. His cycle of compositions called Estímulos para Sonar (Sound Stimuli) employs scores based on film animation, geometric shapes, and structural modules derived from fire, and chemical, acoustic, and electric phenomena. Blanco was Director of the Laboratorio Nacional de Música Electroacústica, President of Cuban National Federation of Electroacoustic Music (CIME/UNESCO), Vice President of the Cuban Section of the CIM/UNESCO. He has three times been a jury member of International Electroacoustic Music Contest of GEMB, Bourges, France and President of the International Festival of Electroacoustic Music “Primavera en Varadero” and “Primavera en La Habana”.