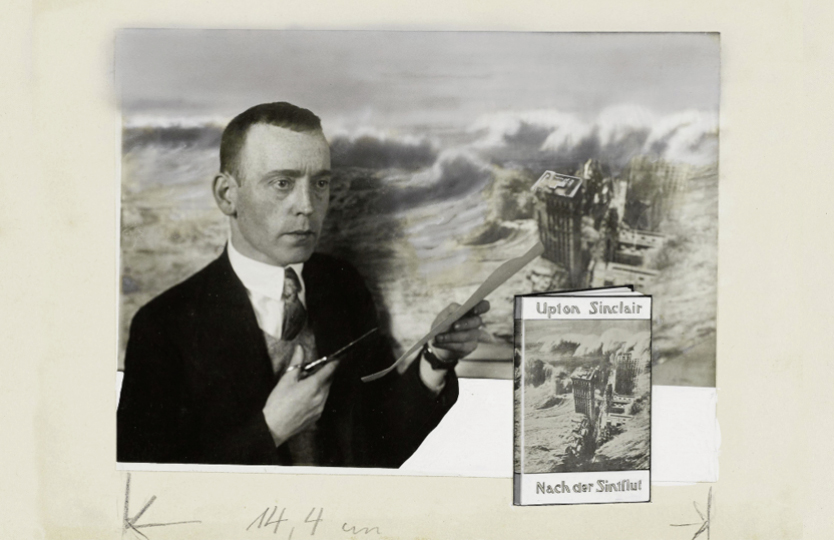 Dr. Zervigón is Professor of the History of Photography at Rutgers University (USA). He received his doctorate in art history from Harvard University in 2000, and his scholarship since then has concentrated on the interaction between photographs, film, and fine art. His work generally focuses upon moments in history when these media prove inadequate to their presumed task of representing the visual. His book John Heartfield and the Agitated Image: Photography, Persuasion, and the Rise of Avant-Garde Photomontage (University of Chicago Press) was published in 2012.

Angela Lammert, is part of the curatorial team of the exhibition John Heartfield. Photography plus Dynamite, which she has initiated together with Rosa von der Schulenburg und Anna Schultz on behalf of the Akademie der Künste, Berlin.

A statement by Dr. Zervigón about the catalogue:

The exhibition catalogue John Heartfield – Photography Plus Dynamite does what only the Akademie der Künste could achieve. It offers potent revelations on the material processes that made the famous photomonteur’s work possible. In so doing, it provides a fresh look at the larger context behind his work and reception. [...]

In early 2003, as word got out that I was preparing a Heartfield exhibition at the Getty Research Institute, there were two general reactions to the news. Germans asked “Is there anything left to say about him?” and Americans queried “who is he?” Both questions were reasonable. [...] A reader can now find both approaches beautifully merged in the catalogue for the new Heartfield exhibition and in the accompanying program of public events.

Angela Lammert (AL): What is the difference between the American and the European perspectives on the work of John Heartfield?

Andrés Zervigón (AZ): The famous photomontage master had been a consistent subject of interest for decades in both the DDR, where he had settled after the war, and in the BRD, where the generation of ’68 embraced him as a radical hero of art. The ongoing interest on both sides of the Iron Curtain climaxed in the expansive 1991 retrospective of his work, which travelled to Los Angeles in 1993. By 2003, however, the memory of Heartfield had largely faded from California. Fortunately, it was not entirely extinguished. The Getty had collected Heartfield enthusiastically. For a start, it seemed that European studies of the artist had been made to perform certain kinds of work that left large blind spots. In the DDR, Heartfield effectively served as a communist idol. Correspondingly, his difficult relationship with the German Communist Party and his closeness with the AIZ publisher Willi Münzenberg, who became a committed anti-Stalinist by 1938, generally could not be discussed. By contrast, in the West both in the BRD and the UK, the new Left foregrounded Heartfield’s relationship with Münzenberg as a mark of the artist’s alternative take on socialism, a “third way” between ideologies. But the approach required overlooking Hearfield’s take on the SPD’s supposed “social fascism” and his montages’ frequent praise of Stalin. Roland März in the East and Eckhard Siepmann in the West bravely bucked these trends. American scholarship on Heartfield also digs deep into the archive to tease out the historical complexion of the monteur’s work. In this regard, we follow on the rigor of German scholarship.

AL: In your 2012 book on Heartfield, published in Chicago, you described his work as a political reaction to photography’s dangerous ability to mislead at the moment of its sudden omnipresence in illustrated magazines, postcards and posters. What is new for you about the Akademie catalogue? What discoveries have you made?

AZ: You, Ms Lammert, are able to analyze in your two catalogue contributions the relationship between the copious photographic fragments in the Heartfield collection and the montage maquettes they did—or in just as many cases—did not become a part of. Similarly, Anna Schultz draws together material from Heartfield’s UK exile to track how the artist retooled his processes and themes of mimicry for a British audience unfamiliar with German iconographic histories. The new lessons on Heartfield unfold in abundance, particularly as regards his understudied years of exile in Prague and London, and his postwar travails in the DDR. I found myself just as fascinated by Jeanpaul Georgen’s analysis of frames from Heartfield’s 1918/19 Hohlglasfabrikation film, which was long unavailable because it had not been converted from flammable nitrate stock, and Jeff Wall’s reflections on his meeting with Wieland Herzfelde in 1972. For an American scholar, the material turn in Heartfield studies across so many decades of the artist’s production is a fascinating and welcome development, particularly given the [previously*] difficult access to the art collection outlined in Meike Herdes’s essay.

* This access is now provided through the permanent online resource: www.heartfield.adk.de/en, which was produced as part of the overall Heartfield project.

AL: What role does the visual strategy of the catalogue play?

AZ: A quick flip through the catalogue’s pages already reveals the results. Page after page illustrates the maquettes and photographic fragments that only the Akademie der Künste possesses, but which until now have largely been discussed in close relationship to the final printed photomontages, the primary subject of scholarly and political discussion. In the catalogue and exhibition, these unique objects finally appear at centre stage as part of an essential material work process, receiving the sort of critical attention.