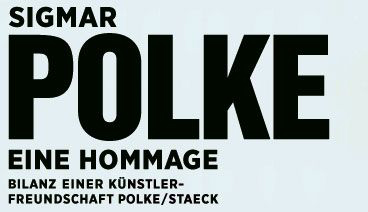 
In his tribute to Sigmar Polke (1941-2010), Klaus Staeck looks onto a four-decade-long friendship and working relationship, dedicating a very personal exhibition at the Berlin Akademie der Künste to one of Germany’s most important artists. The friendship with Polke was due to the fact that Staeck was not only publisher and gallery dealer but also an artist colleague. When asked how it came about that the largest contingent of his editions was published by Staeck, the artist replied succinctly: “He has the printer, the logistics, the distribution and the artists.”

The exhibition at Pariser Platz presents 90 mainly large-size sheets of Polke’s work, covering several decades. Included are objects such as the famous “Kartoffelmaschine” (potato machine), an "apparatus, which can make one potato revolve around another”, of 1969 as well as testimonies and photographs revealing an artistic life. Staeck opens his private archives documenting an intimacy which he also accompanied with photographs. Thus he presents for the first time fax correspondences which Sigmar Polke used in a playful way, drafts, edited and designed invoices, invitations, catalogues. The material reveals Polke as the political and public artist.

Furthermore the exhibition shows the series “Wir Kleinbürger – Zeitgenossen und Zeitgenossinnen” (We petty bourgeois – comrades and contemporaries). The ten-piece ensemble from the years 1974-1976 takes a unique variety of images, symbols and quotations from popular imagery and plays a central role in Polke’s work. With the help of the Michael & Susanne Liebelt-Foundation the series made it into the exhibition of the Akademie der Künste.