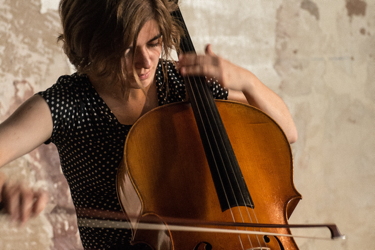 Séverine Ballon‘s work focuses on regular performance of key works of the cello repertoire, as well as numerous collaborations with composers; in addition, her researches as an improviser have helped her to extend the sonic and technical resources of her instrument. She studied the cello at the Hochschule für Musik in Berlin and in Lübeck with Joseph Schwab and Troels Svane. In 2004/05 she was ‘academist’ at the Ensemble Modern (Internationale Ensemble Modern Akademie). She perfected her contemporary cello technique with cellists Siegfried Palm, Pierre Strauch and Rohan de Saram. In 2005/06 she was solo cellist of the Toulouse Chamber Orchestra, but subsequently decided to concentrate on contemporary music and on the premiere of new works. Currently she is working on developing extended techniques for her instrument and finding an appropriate notation. Séverine Ballon particularly enjoys working with contemporary composers and has worked with Helmut Lachenmann, Chaya Czernowin, Rebecca Saunders and Liza Lim. She has premiered a number of solo works which have been written especially for her, including those from Rebecca Saunders, Mauro Lanza and Franck Bedrossian. She has also worked with many of the best known contemporary music ensembles including Klangforum Wien, musikFabrik, Ensemble Intercontemporain and Ictus. She is a member of the Elision ensemble (Australia) and of Multilatérale (Paris).Séverine Ballon gives masterclasses for composers at Harvard University, Stanford University, the Hochschule für Musik in Stuttgart, at the University of Huddersfield, the University of California Berkeley, the University of California Santa Cruz, and at the Tzlil Meudcan composition course (Israel)... In 2008-2009 she was resident artist at the Akademie Schloss Solitude in Stuttgart. Thanks to the Harvard French Scholarship Fund and an Arthur Sachs grant she is a visiting fellow at Harvard University during academic year 2014-2015.