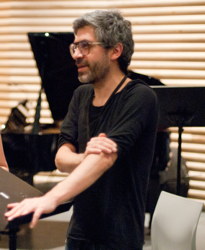 Raised in Mexico although born in Edinburgh, he travelled to Europe in 1999 in search of inspiration and cultural exchange. He took a degree at the Royal Conservatory in The Hague, attended many composition classes and completed his studies at electronic studios such as IRCAM in Paris and CIEM in Mexico City. He has received Dutch and Mexican scholarships and has lived as a freelance composer in Mexico since 2006. Castaños has written instrumental music for a wide range of soloists and ensembles, among the Garth Knox, Diego Espinosa, the Mexico City Wind Quintet, Trio Subtilior, Nouvel Ensemble Modern, Maarten Altena Ensemble, Modelo 62, and Electronic Hammer.