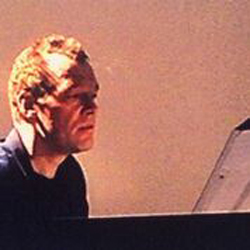 Ernst Surberg, born 1966 in Münster, is founding member of ensemble mosaik. Receiving a scholarship by the Käthe-Dorsch-Foundation, he studied piano with Rolf Koenen and Alan Marks at the University of Arts and the Academy of Music Hanns Eisler in Berlin. After his studies, a master course for contemporary piano music with Jeffrey Burns, triggered Surberg’s intense examination of contemporary music. In addition to his engagement with ensemble mosaik – he shares the responsibility of managing the ensemble with flutist Bettina Junge – Surberg works on the cross-genre band project noch#2, that invites guest musicians like Marian Gold, Jaki Liebezeit, Manuel Liebeskind, Jan Werner and Andi Thoma. In this context, Surberg started composing and premiered several works of his own. Most recently he wrote the music for three theater pieces at the Schauspiel Köln: Der letzte Riesenalk and wozuwozuwozu with Anna Viebrock, as well as Warten auf Godot (Director: Thomas Dannemann). Surberg performed several premieres as soloist as well as with ensemble and orchestra – amongst others works by Stefan Streich, Michael Beil, Enno Poppe, Klaus Lang, Agostino DiScipio, Andrew Hamilton and Sergej Newski. With ensemble mosaik, he gave guest performances at a wide range of the most important international festivals for contemporary music and contributed to various broadcasting recordings and CD productions. Ernst Surberg was 2007-2011 board member of the Initiative Neue Musik Berlin, an association for the self-administration and support of the independent contemporary music scene in the German capital.