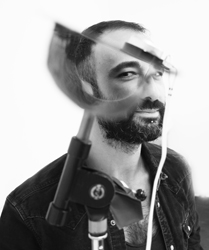 Fabrizio Nocci is an Italian composer, performer and Techno producer. Nocci's work explores the meeting points of many contemporary artistic languages. His activity as a composer includes instrumental music for orchestra and ensemble, experimental electronic and electro-acoustic music. He actively collaborates with directors and video makers in the production of music for films and experimental videos. Furthermore, he writes music for theatre and dance shows. Since 2007 he collaborates with video artists such as Lillevan and Philipp Geist. He has numerous collaborations with soloists, ensembles and orchestras: he has composed for Tetraktis percussions, the clarinetist Alessandro Carbonare, the Lviv Symphony Orchestra, ‘L’arsenale’ ensemble, the group ‘Octandre’ from Bologna and others. He also gave lectures and workshops at universities such as the UdK and TU in Berlin. His music has been performed at the Lucerne Festival of Zurich, at the ‘Teatro Lingotto’ of Turin, The Festival of Light at Potsdamer Platz Berlin, in collaboration with Philipp Geist at Bayreuter Festspiele, with Mapping Installation by Philipp Geist at ‘Teatro la Pergola’ of Florence, at the Ravenna Festival, at the XXXV ‘Cantiere Musicale’ of Montepulciano, at the ‘Teatro Politeama’ of Trieste, at the ‘Goethe Institut’ of Rome and Palermo and in other theatres, auditoriums and festivals in Rome, Berlin and New York.