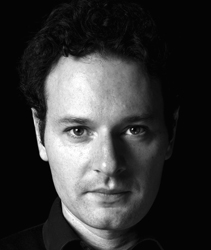 As impossible as it is to define in words, I can say without hesitation that the origins of my music are deeply immersed into the idea of space. Beyond all its phenomenological or merely intuitive meanings, space represents a musical aspect that I have been researched since at least 2003 (“Compositeur associé” at IRCAM, TU Berlin) whose powerful poetry never stops having a strong influence on my musical thinking. Such path has led myself and my music through very diverse experiences by conceiving works like IUS LUCIS (2006/2007 – for two ensembles in two concert halls), FIBRAE (2005 – for two soloists, chamber orchestra and live-electronics), STRALI (2002 – for voice, orchestra and electronic sounds) just to name some of them. A constant curiosity toward a strict interaction between acoustic instruments and live-electronics has led me to share the expertise of some among the most interesting institutions in Europe (IRCAM, Experimental Studio Freiburg, ZKM Karlsruhe, GRM Paris), meeting bright and devoted people who allowed me to collect many precious experiences for which I will always be grateful. For, later, I have transformed many achievements coming from electronic music practice into my own musical vocabulary, nowadays still in progress, translating them also into the world of acoustic and traditional instruments: so that technology has been transcended into pure expressivity. I have also tried to conceive worlds that are sometimes very dense and demanding for listeners, and sometimes so expanded in time to become almost melancholic (SONNET X, 2008 – for tuba and live-electronics), trying to reach the most possible degree of communication like in SONGS OF ANXIETY (2012 – for amplified flute), without falling into obvious solutions. A lyrical abstraction, as to speak, could be the key-word for compositions like ODI DI LEVANTE (2008 – for six instruments) or LASCO (2010 – for seven instruments), while a certain eclecticism dictated by my personal need to create a broad diary-like opus, finds place in the series of “Books” (the most recent one A BOOK OF FORMS, 2014 – for six moving players in a resonant space), where each one of those represents an unique attempt to recreate in sounds those images, experiences, that literature and that culture I have met, known or perceived. And for every composition I had the privilege to hear I have met incredibly skilled and competent musicians who helped my imagination to become true, like Jonathan Stockhammer, Salome Kammer, Kousei Murata, André Richard, Arturo Tamayo, Marco Angius, Evan Christ or the Ensemble Musikfabrik, Ensemble Intercontemporain, Ensemble Modern, e-mex ensemble.... Finally, I cannot forget the words of some among the teachers and mentors I came across until now: Peter Eötvös and his ethic example, Emmanuel Nunes and the few but precious teachings, York Höller who indicated me a direction right at my beginnings, Hans Zender with his keen reflections I still have in mind, Sugawara Sensei who explained me – without words – what I am still searching.