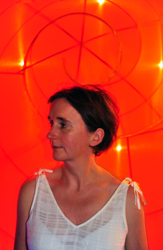 The versatile, enthusiastic and well received Irish composer Karen Power seeks to stimulate, engage and interact with audiences. Her work utilizes two primary sources; acoustic instruments and everyday sounds, spaces and soundscapes. Karen’s output is diverse - both in its approach and delivery - and her primary aim is to capture and translate the essence of an idea through any artistic means necessary. For example, recent projects have been presented as orchestral works, sonic installations, collaborations between sound and dance, image and experimental film, free and guided improvisations and musical happenings. Everyday environments and how we hear everyday sounds lies at the core of Karen’s practice with a continued interest in blurring the distinction between what most of us call ‘music’ and all other sound. She has found inspiration in the natural world and how we respond to spaces we occupy. She continually utilizes our inherent familiarity with such sounds and spaces as a means of engaging with audiences. Resulting works challenge the listeners memory of hearing while simultaneously shifting focus and presenting new contexts for such sounds. Karen treats her works as continual learning experiments with each new piece simultaneously absorbing something from its predecessor and breaking new ground for what is yet to come. Some recent projects include: Gorging Limpet, which is a collaborative project between sound and experimental film, a commission from UK pianist Andrew Zolinsky - focusing on the subtle individual tuning of pianos, The Arctic Circle Residency, hearSpace (2014) – an exploration into the world of Radio with a new interactive radio art composition, a large-scale commission for Bozzini Quartet, a DAAD Artist-in-Berlin Award for 2015, Instruments of Ice (2015) - a sonic conversation between QME + the Arctic and once below a new sound installation + soloists, which is based on Berlin’s underground bunkers and will be premiered in  Berlin@MikroMusik 2015.