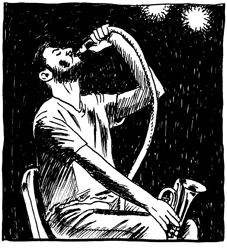 Mazen Kerbaj is a Lebanese comics artist, visual artist and musician born in Beirut in 1975. He also works on selective illustration and design projects and is a part-time instructor at the American University of Beirut. Kerbaj is author of more than 15 books, and many of his short stories and drawings have been published in anthologies, newspapers and magazines. His work has been translated into more than ten languages in various local and international publications. His paintings, drawings, videos, live performances and installations have been shown as part of numerous solo and collective exhibitions, in galleries, museums and art fairs around the globe. Mazen Kerbaj is widely considered as one of the initiators and key players of the Lebanese free improvisation and experimental music scene. He is co-founder and active member of MILL, the cultural music association behind Irtijal, an annual improvisation music festival held in Beirut since 2001 (www.irtijal.org), and co-founder of Al Maslakh, the first label for experimental music in the region operating since 2005 (www.almaslakh.org). As a trumpet player, whether in solo performances or with long-lasting groups like “A” Trio, Kerbaj pushes the boundaries of the instrument and continues to develop a personal sound and an innovative language, following in the footsteps of pioneers like Bill Dixon, Axel Dörner and Franz Hautzinger. Since 2000, he has played in solo and group performances in the Middle East, Europe and USA. He has performed with many musicians, some more frequently than others, including: Sharif Sehnaoui, Raed Yassin, Franz Hautzinger, Lê Quan Ninh, Mats Gustaffson, The Scrambled Eggs, Guillermo Gregorio, Gene Coleman, Michael Zerang, Jim Baker, Jack Wright, Michael Bullock, Vic Rawlings, David Stäckenas, Martin Küchen, Axel Dörner, Ricardo Arias, Jason Khan, The Ex, Thomas Lehn, Joe McPhee, Jean-François Pauvros, Bob Ostertag, Raymond Boni, John Butcher, Martin Blume, Tony Buck, Magda Mayas, Peter Evans and Nate Wooley.

Selected Music Works and Projects (since 2013)