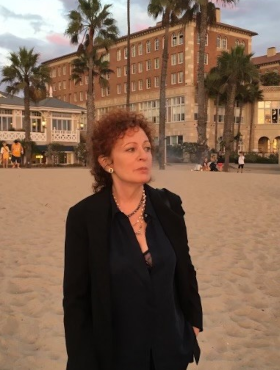 The US photographer and filmmaker Nan Goldin occupies a central position in contemporary photography. She has broken taboos and new ground with her photographs of her personal life, those around her, and of the LGBT community, thus advocating for acceptance and the growing recognition of the LGBT scene. The immediacy of her photographs stems from her physical and emotional allegiance and proximity to a milieu that has been closed to many people and opened up by her as an artist.

Goldin works and conceives her images in rhythmic sequences produced as photographs, slide shows of up to thousands of images, and films. Her interest is in the cumulative nature of her work compositions, their extension, modification and the mutual relationships between them. Moving images, sound and archive material are also integrated into her slide and film productions and, like cinema films, are finally given a musical treatment, which accounts for an essential part of her artistic work.

One of her best-known and iconic works of the last 40 years is the installation The Ballad of Sexual Dependency (1986), conceived as a slide-sound show and loosely based on a song by Kurt Weill from Bertolt Brecht's Threepenny Opera (1928). In this, Goldin shows and honours her New York community of friends and lovers, many of whom she lost to AIDS in the 1980s and years thereafter.