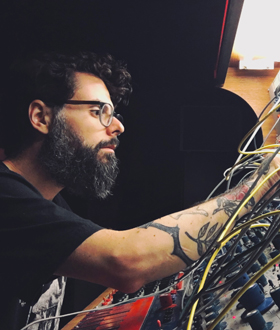 Pedro Oliveira holds a PhD from the Berlin University of the Arts. His research advances a decolonizing, material inquiry of (machine) listening in articulations of border violence, and is expressed through both artistic and academic work such as sound performances, audio essays, multi-channel installations, and writing. Pedro Oliveira’s work has been supported by and exhibited at CTM Festival, transmediale, Deutschlandfunk Kultur, the Max-Planck Society, Goethe Institute Brussels, and IASPIS Stockholm – to name a few.

During the residency I will develop a long-form, multichannel sound installation exploring the idea of "spectralization" of the (migrant) voice. The main driving force of this work is a lo-fi, analogue "reverse engineering" of the so-called "dialect recognition software" in use by the German migration authorities since 2017 for cases of undocumented asylum seekers. A publication will juxtapose the sound piece with added layers of both clarification and complication.