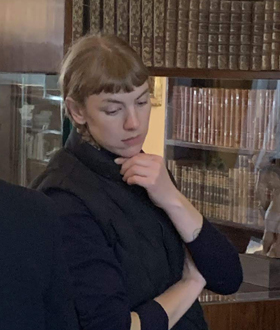 Mia Sanchez completed her MA in Arts at the Institut Kunst in Basel. Before that, she studied at the Hochschule der Künste Bern (HKB) and spent a year as a visiting student at the Hochschule für bildende Kunst Hamburg (HfbK). Her works are often made in series and play with scale and stage-like characteristics. The use of repetition and scene-like settings suggests narrative connections. Some resemble props from a puppet show; the works' childhood associations open up spaces of remembrance. The serial nature of the objects, however, shift these mementos from the purely personal towards the social. The inner as private, personal experiences, the outer as the structurally order we are enveloped by; being true to the personal is political.

In some of my recent works, I've increasingly explored the genre of crime fiction. My research is based on film and series, as well as on literature. I am particularly interested in the figure of the female detective, whereby I am not primarily interested in a linear representation of the figure, but rather in its contextualisation; in her surroundings, what encompasses her, everything that outlines the character. In Berlin I would like to continue my research incl. various media.