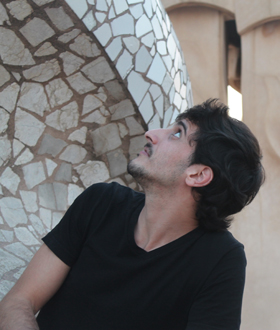 Fabià Santcovsky studied composition in Barcelona, Stuttgart and Berlin under Gabriel Brncic, Mauricio Sotelo, Marco Stroppa and Daniel Ott. He writes music theatre, orchestra and chamber music pieces. Notable works include the operas "Transstimme", commissioned by the Münchener Biennale, and "Las Chanchas", commissioned by the Teatro Argentino de La Plata, and works commissioned by Barcelona Symphony Orchestra (OBC) and SWR Symphony Orchestra Stuttgart. He was awarded 2nd Prize at the "Toru Takemitsu Composition Award" in 2015 and the Wardwell Scholarship of the AvHumboldt-Stiftung.

This period coincided with the production and performances of the last music theatre piece I composed, "Transstimme", for the Münchener Biennale 2020 as a coproduction with Staatstheater Braunschweig. This work has opened some new directions for my creative work related to the use of electronics in combination with the voice, a field in which I would like to work further during the residency, along with writing a piece commissioned by the Spanish group OCAZEnigma. For some time, I've also wanted to write on the experience of reflecting on the role of singing in contemporary forms of music theatre, which could, in particular, be nourished by the synergies possible in the context of the AdK.