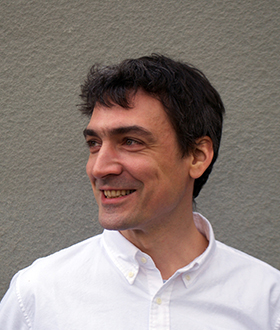 Stefan Keller studied oboe in Zurich from 1995 to 2002 and then composition, music theory and electro-acoustic music at the Hochschule für Musik Hanns Eisler in Berlin from 2002 to 2007. In 2019, he was awarded a doctorate in comparative musicology at the Freie Universität Berlin. From 2006 to 2016, he taught theoretical subjects, analysis of new music and instrumentation at HfM Hanns Eisler. He attended Cursus 1 at IRCAM in Paris in 2008/2009 and stayed at the Cité des Arts as part of a fellowship from the Berlin Senate. He is a 2019/2020 fellow at Villa Massimo in Rome. Stefan Keller has, among others, been awarded the Composition Prize of the City of Stuttgart (2004), a Composition Fellowship of the Berlin Senate (2014 and 2017) as well as a Pro Helvetia residence in India (2018). His works are performed by Ensemble Modern, Ensemble Intercontemporain, Ictus Ensemble, KNM Berlin, Zafraan Ensemble, Ensemble Mosaik, Ensemble ascolta and Neue Vocalsolisten Stuttgart, among others.

"I used my time in Olevano primarily to work on a new piece for tabla, vocals and live electronics, which I will perform at the Eclat Festival in Stuttgart in 2020 with singer Andreas Fischer. The electronics serve as a form of mediation and a link between the vocals and the drum, which are projected onto each other like masks, thus multiplying, disguising and dissolving their identities."