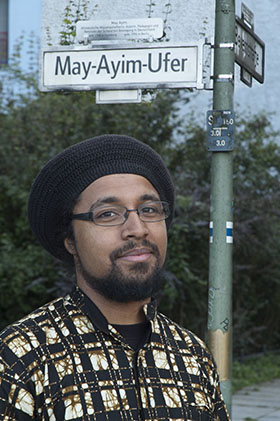 Joshua Kwesi Aikins is a political scientist, human rights activist and PhD student at the University of Kassel. He studied political science at Freie Universität Berlin and the University of Ghana and has combined scientific and activist engagement with issues of empowerment and participation in both the German and the Ghanaian context since then. He is an expert advisor to the Thuringian State Parliament's special commission on racism and discrimination. Prior to this, he coordinated the preparation of a Parallel Report on the Report submitted by Germany to the UN Committee on the Elimination of Racial Discrimination as a project consultant. As a member of Initiative Schwarze Menschen in Deutschland (Black People in Germany Initiative) he is particularly involved in promoting the human rights-based empowerment of black people and people of colour. He has been actively working to achieve a change of perspective in the politics of remembrance that facilitates anti-colonial and decolonial rather than colonial commemoration in Berlin for over 15 years. In this context, he was co-author of the dossier Straßennamen mit Bezügen zum Kolonialismus in Berlin (street names with references to colonialism in Berlin), which lists more than 70 streets throughout Berlin with colonial references, presents these in their historical contexts and calls for a decolonising transformation of public space. He was instrumental in the renaming of Berlin’s Gröbenufer street into May-Ayim-Ufer.