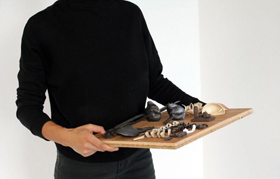 Julia Phillips was born and raised in Hamburg and is citizen of Germany and the United States. She studied Visual Arts at the Academy of Fine Arts Hamburg before attending Columbia University’s MFA program in New York. After graduating in 2015, she has been based in New York and attended several international residency programs. Alongside works on paper and videos, Phillips works primarily with ceramics and metal, creating sculptures reminiscent of functional objects that suggest a use for the human form and physical relations. Her work is currently on view at the New Museum in New York City, and her first institutional solo exhibition opened in April at MoMA PS1, titled Failure Detection. Furthermore Phillips is included in the 10th Berlin Biennial.