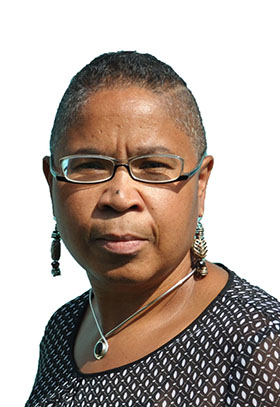 Peggy Piesche, who was born and grew up in East Germany, is a black German scholar of literature and cultural studies. After many years of teaching in the Netherlands (University of Utrecht) and the United States (Vassar College and Hamilton College/NY), she worked at the Academy of Advanced African Studies (University of Bayreuth) until 2016, with her research focusing on "Zukunftskonzeptionen in Afrika und der Diaspora" (Future Concepts in Africa and the Diaspora). Her research and teaching are both located within the fields of and at the respective interfaces between Black Feminist Studies and Critical Race Studies, diaspora and translocality, performativity of cultures of memory (Spatiality and Coloniality of Memories) and Whiteness Studies. She is currently a lecturer on feminism at the Gunda Werner Institute of the Heinrich Böll Foundation. She has published on racialisations and black images, colonial history and collective memory as well as afro-futurism and African/diasporal plans for the future. Piesche is, among others, co-editor of Mythen, Masken und Subjekte. Kritische Weißseinsforschung in Deutschland (Myths, masks and subjects. Critical whiteness studies in Germany) (2005/rev. version 2009) and published the anthology Euer Schweigen schützt Euch nicht. Audre Lorde und die Schwarze Frauenbewegung in Deutschland (Your silence does not protect you. Audre Lorde and the black women's movement in Germany).