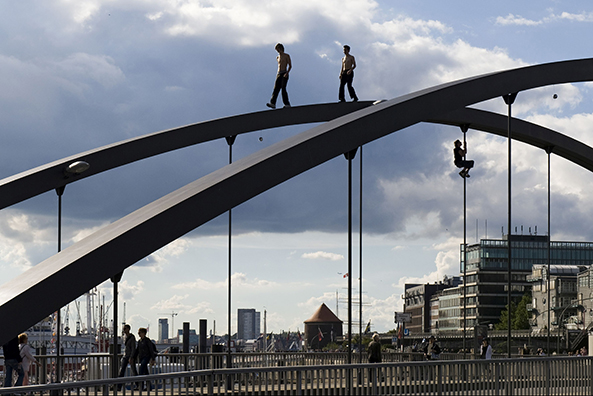 Whether in the professional world, in the media or in political discourse – we are used to take the many advantages of the city for granted, while emphasizing its shortcomings at the same time: the lack of affordable housing, the high level of dust pollution and other environmental toxins, the high cost of living, the noise, the stress, the dangers. The general opinion is that these problems have to be solved, if our cities are to have a future at all. At the same time we easily overlook, the benefits cities have to offer to its inhabitants every day, as well as the potential it provides in the development of more sustainable built and social- environments.

Photographer Erik-Jan Ouwerkerk and the Institute for Urban Design and Planning at Leibniz University Hannover set out on the search. Ouwerkerk's pictures tell almost casually of the inexhaustible wealth of urban habits. The Institute for Design and Urban Development at Leibniz Universität Hannover saw the pictures as an opportunity to examine the seemingly random. The result is more than 200 texts, drawings and diagrams, which form a wall-filling “information shadow” behind the photographs.

The resulting room installation is as diverse, surprising and at times as contradictory as the cities themselves. It is a plea in favour of the urban space, which – despite all of its deficits – already offers previously unimagined opportunities for change and reform.