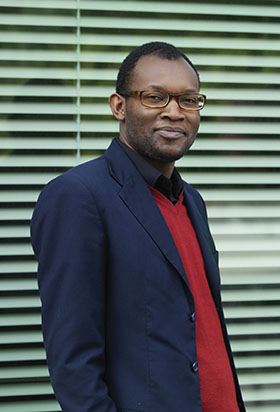 Fiston Mwanza Mujila was born in Lubumbashi, Democratic Republic of Congo, where he studied Literature and Human Sciences. He now lives in Graz, Austria and teaches African literature. His writing has been awarded numerous prizes, including the Gold Medal at the 6th Jeux de la Francophonie in Beirut and the Best Theatre Piece ("Preis für das beste Stück," State Theatre, Mainz) in 2010. His novel, Tram 83, was a French Voices 2014 grant recipient, and won The Etisalat Prize for Literature 2015 and the Internationaler Literaturpreis 2017, as well as being longlisted for The Man Booker International Prize and the Best Translated Book Award (both 2016). His poetry, prose work, and plays are reactions to the political turbulence that has come in the wake of the independence of the Congo and its effect on day-to-day life.