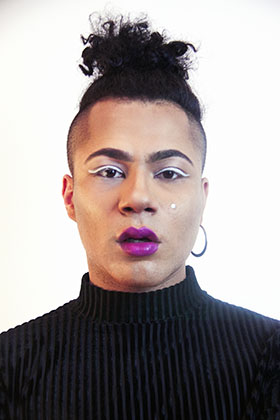 Travis Alabanza is a London based performer and writer with work focusing around their identities as a Black, trans, gender non-conforming body. In the last two years they have been noted by ID, DAZED, MOBO Awards and Artsy as one of the most prominent emerging queer artistic voices. In 2016–2017 they toured extensively, performing in venues such as the ICA, V&A, Tate, Roundhouse and abroad, and released their debut poetry book Before I step Outside (you love me). Completing an artist residency at the Tate at age twenty-one, Alabanza was noted as one of the most influential young queer figures in the UK, paving many of current conversations on the intersection of gender non conforming bodies and race.