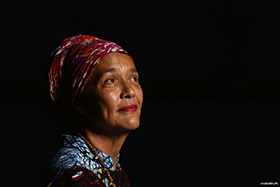 Françoise Vergès holds the Chair “Global South(s)” at Collège d’études mondiales, Paris. She obtained her PhD in Political Science at the University of California Berkeley (1995) and has taught in UK (Sussex University and Goldsmiths College, London). Françoise Vergès has collaborated with filmmakers and artists, among others Isaac Julien, Yinka Shonibare, Arnaud Ngatcha, William Wilson, Kader Attia, and was project advisor for Documenta 11. For the 2012 Paris Triennial she organized the programme “The Slave in Le Louvre. An Invisible Humanity.” Vergès has written extensively on memories of slavery as a counter-hegemonic narrative, Frantz Fanon, psychoanalysis, Aimé Césaire, coloniality of power and feminism, and the postcolonial museum. Her last book (March 2017) Le ventre des femmes:Capitalisme,racialisation, féminisme(The Woman’s Womb. Capitalism, Race, Feminism) is an analysis of the racial management of the black women’s womb in the global South by States and international organizations and a critique of white French feminism.