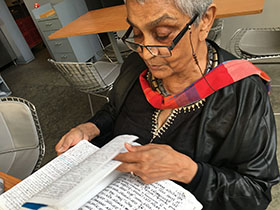 Gayatri Chakravorty Spivak, University Professor in the Humanities, Columbia University, holds honorary degrees from the Universities of Toronto and London, and Oberlin College, Universitat Rovira i Virgili, Rabindra Bharati University, Universidad Nacional de San Martín, Universities of St. Andrews, Ghana-Legon, Presidency University, Yale University, Universidad de Chile. Her books are In Other Worlds (1987), Thinking Academic Freedom in Gendered Post-Coloniality (1993), Outside in the Teaching Machine (1993); Imperatives to Reimagine the Planet (1997), A Critique of Postcolonial Reason (1999), Death of a Discipline (2003), Other Asias (2007), An Aesthetic Education in the Age of Globalization (2012), Readings (2014) and Du Bois and the General Strike (forthcoming). She has translated Jacques Derrida, Of Grammatology (1976); Mahasweta Devi, Imaginary Maps (1993), Breast Stories (1997), Old Women (1999), Chotti Munda (2002); Ramproshad Sen, Song for Kali (2000); Aimé Césaire, A Season in the Congo (2012). Prices include: Kyoto Prize (2012), Padma Bhushan (2013), Lifetime Achievement (MLA, 2018). She has been a full-time activist in primary health care, ecological agriculture, and rural elementary education and been involved with feminist social movements from the United Nations through academic theory to grass roots.