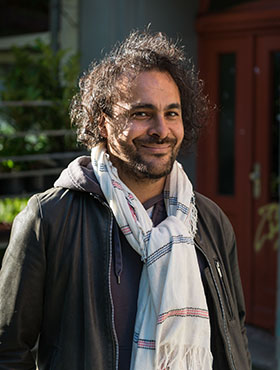 Kader Attia (b. 1970, Dugny, France), grew up in Paris and in Algeria. Preceding his studies in Paris and Barcelona, he spent several years in Congo and in South America. He lives and works in Berlin, Paris and Algiers. Kader Attia’s intercultural and interdisciplinary approach of research explores the perspective societies have on their history, especially as regards experiences of deprivation and suppression, violence and loss, and their traces in collective memory. His socio-cultural research has led Kader Attia to the notion of “Repair”, describing an infinite process closely linked to loss and wounds, to recuperation and re-appropriation. “Repair” reaches far beyond the subject and involves it in evolutionary processes in nature, culture, myth and history. In 2016, Kader Attia founded a space in Paris providing an agora for vivid discussion. Focusing on decolonialisation of knowledge, attitudes and practices, it aspires to de-compartmentalise knowledge by a transcultural, transdisciplinary and transgenerational approach. Kader Attia’s work recent solo exhibitions include SMAK Ghent; Museum of Contemporary Art, Sydney; Museum für Moderne Kunst, Frankfurt; Beirut Art Center; Whitechapel Gallery, London; or KW Institute for Contemporary Art, Berlin. Kader Attia took part in the 57th Venice Bienniale, dOCUMENTA (13) in Kassel, and group shows at MoMA, New York; or Tate Modern, London; Centre Pompidou, Paris or The Solomon R. Guggenheim Museum, New York, just to name a few. In 2016, Kader Attia was awarded with the Marcel Duchamp Prize, followed in 2017 by the Prize of the Miró Foundation, Barcelona, and the Yanghyun Art Prize, Seoul.