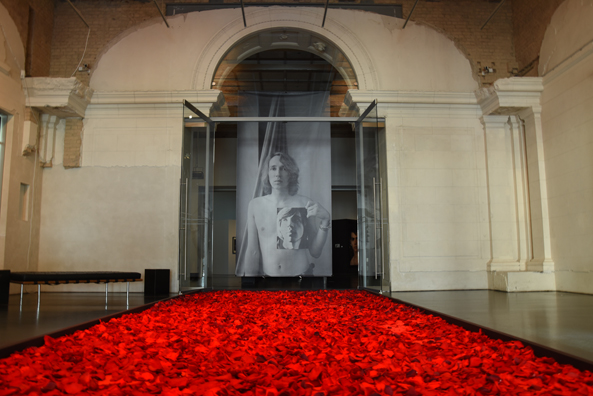 Entrance hall of the exhibition "By-Products of Love" 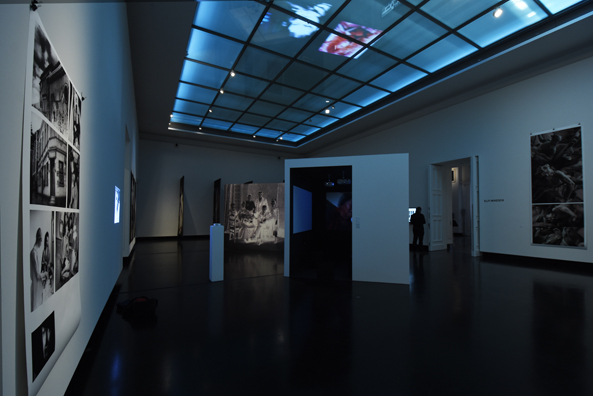 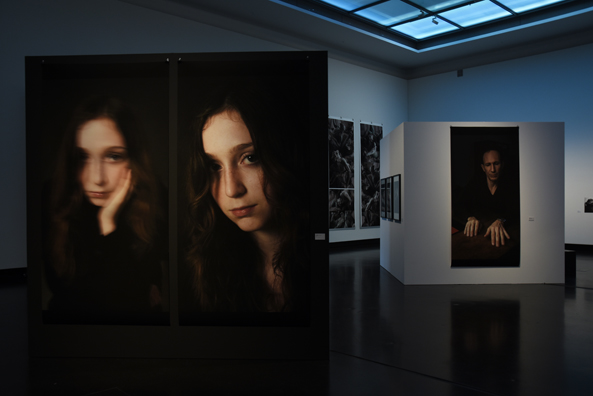 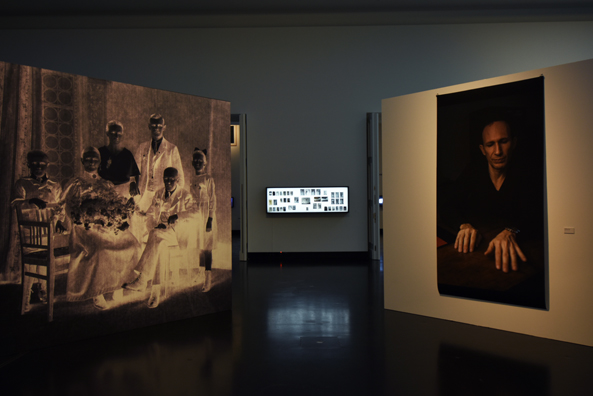 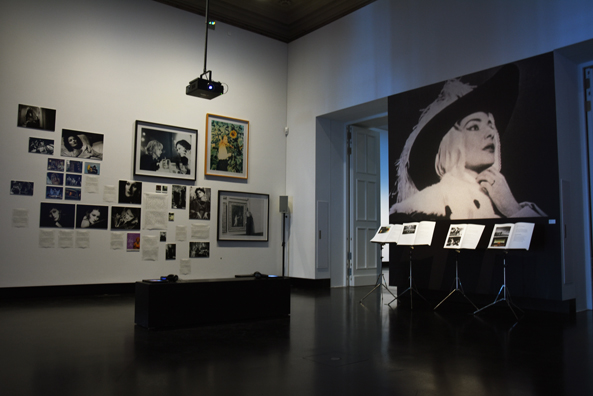 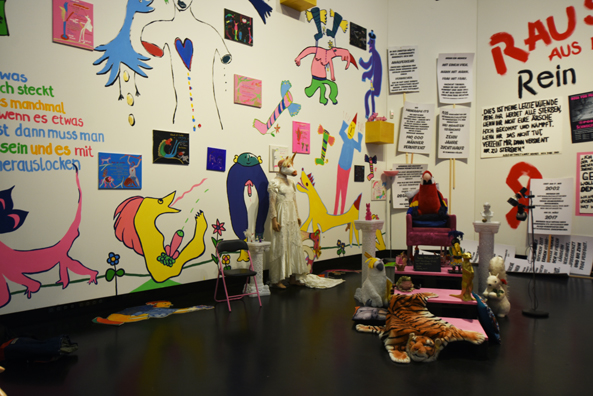 Elfi Mikesch, Rosa von Praunheim, and Werner Schroeter shared a tremendous productiveness. As cinematographer, Elfi Mikesch shot over 40 films, directed over 20 and is also an industrious photographer and writer. Rosa von Praunheim made over 150 films, writes poetry, draws, publishes books and works as a theatre director. Werner Schroeter (1945–2010) directed more than 30 films, some of them as international coproductions, while the list of his theatre and opera productions with the most important ensembles in Germany and abroad, including in Paris, Amsterdam and Venice, is long. The exhibition only presents a fraction of this diversity, focusing instead on lesser-known and some current works. Particularly apparent is the transgressive moment and hence the discovery of alternative forms for artistic expression. At its heart is the friendship between the artists as a connecting, persistently recurring motif.

The various stages and facets of the friendship between the artists unfold in the Max-Liebermann-Saal of the Akademie's building on Pariser Platz. A triplicate projection presents excerpts, especially from the early works of Mikesch, Praunheim and Schroeter, revealing points of contact and overlaps in their collaboration and providing tentative impressions of initial motifs that went on to play a significant role in the respective artist's oeuvre. Love and passion, pain and hurt are evident in the numerous letters, photographs, diary extracts and scripts presented in the showcases, but repeatedly also the productivity engendered by the artists' interaction.

We are like three clouds that are becoming flowers, penises, a vagina, and golden crowns. We were unusual and unwieldy. Werner Schroeter, with his pathos and the strikingly sad gestures of his muse Magdalena Montezuma, driving some viewers crazy, strange and never seen before. Elfi Mikesch, searching for beauty, her images full of longing and a dramaturgy sometimes off the wall. And Rosa von Praunheim, wild, expressive, and ugly. At the time we began making films, the 1968ers opposed art and favoured political posters. Later, as many found their way back to conventional drama, we were too odd, too illogical, too artistic. Public television and public film funds saved us, the outsiders, giving us the chance to make careers out of our calling. But we are still undiscovered, a secret in the German cinema landscape, like three clouds just waiting for a good rain to soak the audience with our bright colours, inspiring them to dream with us. It is no coincidence that we are gay, lesbian, and transgender. But who’s not?

Werner Schroeter's rich body of work is rearranged, presented and commented in two rooms by his longstanding companions and confidants. Curated by Elfi Mikesch, cinematographer on several of his films and probably the most able 'translator' of Schroeter's world of imagery, and by Claudia Lenssen, who published his autobiography Days of Twilight, Nights in Frenzy 2011 in Aufbau-Verlag, the first room focuses particularly on Schroeter's muse Magdalena Montezuma (1942–1984), with whom he completed numerous film and theatre projects. Her eccentric manner and sweeping gestures are characteristic of his work. There is an important nod to Maria Callas, whom Schroeter deeply admired. The film Argila (1969), a split-screen projection, is presented next to earlier, less well-known cine productions. At auditory level Eberhard Kloke, composer and important companion, has taken music that Schroeter adored or used, blending it with interview extracts to compose the impressive sound collage Klanginstallation I – IV as a musical tribute to Schroeter. Also featured in the room are excerpts from a 70-hour interview that Claudia Lenssen conducted with Werner Schroeter shortly before his death.

The French costume and stage designer Alberte Barsacq, who collaborated with Schroeter on almost all the theatre and opera productions and was responsible for the stunning interior used in Malina and This Night (Nuit de Chien), blends projected photographs, sketches, fragments of text and drafts into a collage. Eight largeformat photographs reveal a lesser-known facet of Werner Schroeter's artistic oeuvre. Drastically enlarged Polaroid photographs allow viewers to discover Schroeter the photographer. He captured his stars in moments of intimacy and vulnerability, bathed in cascades of light that lend the images a picturesque aura.

Elfi Mikesch, active cinematographer and director, presents a sweeping panorama of her work, from its earliest beginnings to the present day, in her exhibition room. At its centre are two wooden blocks, a Black Box and a White Cube. The first one features a monumental dual projection of her current work L.A. Tango, which is based on material that Mikesch shot 20 years ago during a sojourn at Villa Aurora, Los Angeles, once home to Leon Feuchtwanger during his period in exile. The White Cube references one of her earliest productions: Execution. A Study of Mary (1979), a photographic film. The installation STÜCKE – Under the Skin, which consists of large photographs, is used by Mikesch to build a bridge to a strongly autobiographical film Fever (Fieber, 2014), which deals with her childhood in Judenburg. The Austrian composer Daniel Lercher contributes Missa Brevis (Kleine Messe) as the soundtrack for her installation. Also included in this context are two photographs of Elfi Mikesch's father, a foreign legionnaire whose pictures from his time in the military were a central element in the clash between father and daughter in the film Fever.

Rosa von Praunheim is a prominent filmmaker and activist. But his creativity is actually boundless. His play Jeder Idiot hat eine Oma, nur ich nicht is currently showing at the Deutsches Theater in Berlin. His drawings dominate the walls in his exhibition room, while his poetry is broadcasted in a tent. The actor Christiane Ziehl will read from Rosa von Praunheim's poems every Wednesday at 6 pm. His biography is equally apparent in the objects on show. At the entrance, visitors are required to force their way through bars that symbolise the place of his birth in a Riga prison, while the highlight and terminal point of the room is a mausoleum in which Rosa von Praunheim pays last respects to his stars like Luzi Kryn and Lotti Huber.

Werner Schroeter idolised Maria Callas and adored the major works by Beethoven, Wagner, and Strauss. He found an important ally in Eberhard Kloke, who interviewed Schroeter shortly after he had learned of his illness. Kloke collocates this audio material with his sound composition. The audio sequences begin with the joint musical theatre projects by Werner Schroeter and Eberhard Kloke from 1987 to 2008. Some of the quoted passages are transcripts of their collaborations and adapted audio sequences from other related recordings. At the heart of the compensation is a Benedictus passage from Beethoven's Missa Solemnis in the interpretation by Mischa Mischakoff (solo violin), the NBC Symphony Orchestra and Arturo Toscanini (conductor) from 1940, which Werner Schroeter often used and quoted in his theatre work.

Combined with the matching audio passages, the monologue sections are taken from various interviews conducted with Werner Schroeter between 2006 and 2009, in which he speaks of his underlying artistic philosophy. Klanginstallation I – IV presents a contemporary view of the artists' collaborations in musical theatre, allowing the original approach to evolve into an independent work in its own right.

Werner Schroeter’s photographic oeuvre from 1973 to 2009

Virtually unknown to the present day is that the director Werner Schroeter photographed incessantly from the nascent days of his artistic career. Unlike directors who use photography to 'capture' or 'experiment with' locations, scenes or people for their project, Schroeter's photographs are independent works. Landscape vistas, still lifes, and most commonly psychologically interesting portraits of people with whom he collaborated, like Isabelle Huppert. The images were usually taken coincidently, as if by chance, using only the existing light in the momentary environment. Here, Schroeter generally worked with miniature cameras like Polaroid, Minox and even disposable ones.

All of the photographs share a suggestive aura and a keenly developed instinct for psychological dramaturgy. In them, Schroeter reveals a similarly remarkable sensitivity for composition and emotional interplay as the young Stanley Kubrick demonstrated as a photographer before his career as a film auteur. Schroeter is considered "one of the last major melodramatists of European cinema". His powerful artistic imagery that even in his films focuses consistently on the singular picture, elevates him to the status of 'image sculptor' at the side of other German filmmakers like Wim Wenders and before him Fassbinder, who, each in their own way, were proponents of eulogies to evolved narration.

Most of Schroeter's photographs from 1973 on have been documented due to the tireless research of the art dealer Christian Holzfuss, a long-standing friend of Schroeter, who started this process in 2004. Schroeter's photographs first featured in an exhibition at Haus am Lützowplatz in Berlin, which presented a selection of his works, drastically enlarged according to the artist's instructions, in 2009/2010. (Text by Alexandra von Stosch)

Why We Love Each OtherThe story of friendship between the film directors Elfi Mikesch, Rosa von Praunheim, and Werner Schroeter