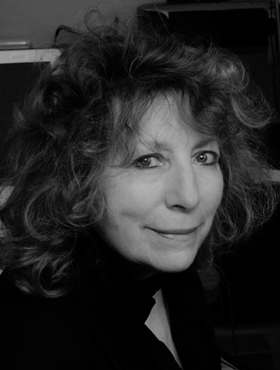 Elfi Mikesch was born in 1940 in Judenburg in Styria as the daughter of a former Foreign Legionnaire, small haulier, and projectionist and a stenographer, childminder, and housewife. She initially completed an apprenticeship as a photographer and worked at a traditional photo studio. In 1960 she married the painter and photo-lithographer Fritz Mikesch, with whom she explored the art scene in Innsbruck. In 1962 the couple moved to Frankfurt/Main, where they came into contact with the student movement and Vietnam War opponents, and where Elfi Mikesch trained as a beautician. A short time later they came to know Rosa of Praunheim, and they followed him to West Berlin in 1967. The experience in the eccentric company surrounding Rosa von Praunheim and subsequent encounter with Werner Schroeter and Magdalena Montezuma called for new perspectives. Oh Muvie, a photo novel produced with Rosa von Praunheim, was published in 1969.

In 1971 Fritz and Elfi Mikesch spent three months travelling around Asia and America with Rosa von Praunheim in order to shoot his experimental feature film Passions (Leidenschaften). This was followed by a three-year distance from each other, an interim phase of self-discovery in Zen. In 1976 Elfi and Fritz Mikesch separated but their friendship continued.

Life is a three-act play. In the first act, we find our dream and decide to follow it. In the second, we try to realize it, obstacles arise, conflicts, your career becomes a problem, it goes up and down. And in the third act, a resume is drawn up: What did I do with my dream? Is it forgotten? How can I manage to laugh about everything?

In 1978 Elfi Mikesch shot the poetic documentary film The Blue Hawaii (Ich denke oft an Hawaii), for which she was awarded the Bundesfilmpreis (Federal German Film Award) in silver. The following year she realised Execution – A Study of Mary, a photo film which also earned her the Bundesfilmpreis award in silver. In addition to this, her lesbian identity and the voices, images, and films of women came along as a new attitude to life. By then she was living with her girlfriend Anke Rixa Hansen. In 1980 Elfi Mikesch shot the portrait of an unusual retirement home in Hamburg, What Shall We Do Without Death (Was soll'n wir denn machen ohne den Tod). This was followed by films she realised with Monika Treut, including Seduction: The Cruel Woman (Verführung: Die grausame Frau), which in 1985 was seen as a bold provocation on the question of gender roles and power relations between the sexes, as well as feature films and documentaries of her own.

Elfi Mikesch worked as a cinematographer on many occasions with filmmakers such as Rosa von Praunheim, Werner Schroeter, Monika Treut, Lilly Grote, Cynthia Beatt, Heinz Emigholz, and Peter Lilienthal. At a time when a woman behind the camera was still unusual, she made an international name for herself as a pioneer of her profession. She received the German Camera Award three times: in 1986 for The Rose King (Der Rosenkönig), in 1992 for Malina – both directed by Werner Schroeter – and the Honorary Award for her life's work in 2006. Elfi Mikesch shot Mondo Lux, her very personal portrait of Werner Schroeter's imagery, in 2010/11 and her autobiographical film Fever featuring Eva Mattes and Martin Wuttke in 2014.

Since 1995, Elfi Mikesch has been living and working with filmmaker and artist Lilly Grote.