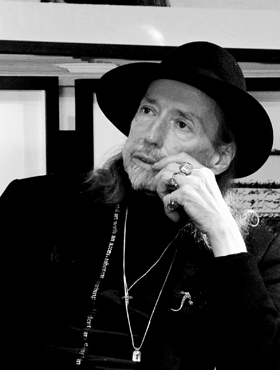 Werner Schroeter, born on 7 April 1945 in Georgenthal (Thuringia), was the son of an engineer for mechanical braking systems and a housewife with an interest in music. He grew up in Dossenheim, near Heidelberg, after the family fled from Bielefeld. Fascinated by Italian bel canto opera and his favourite diva Maria Callas, he spent several months during his youth in Naples, before completing his Abitur at the English-language gymnasium in Heidelberg. He subsequently studied briefly at the University of Television and Film Munich (HFF Munich) as a member of its inaugural class.

Werner Schroeter's encounter with Rosa von Praunheim and American underground cinema at the 1967 EXPMNTL film festival in Knokke-le-Zoute (Belgium) was the beginning of an extremely prolific career lasting more than forty years. He was a cosmopolite and the director of over 70 films, theatre, and opera productions.

To quote Pyotr Tchaikovsky – it is a quotation that I love – I was concerned only with ‘the continuing contrast between pain and beauty’, which reveals the only legitimate artistic search for truth. Without pain and the search for truth, there is no beauty.

Werner Schroeter, Days of Twilight, Nights of Frenzy. A Memoir. The University of Chicago Press, 2017, p. 219

Eika Katappa (1969) brought Werner Schroeter acclaim as one of the most radical stylists of German avantgarde film. He trusted in the pathos of great suffering and love gestures, consciously fusing them with the sentiment of popular songs to question the gap between high and trivial culture. Werner Schroeter collaborated with his muse Magdalena Montezuma until her early death in 1984. Elfi Mikesch, who he met in Rosa von Praunheim's circle of friends, was the cinematographer for several of Schroeter's film projects, including Magdalena Montezuma's last film, The Rose King (Der Rosenkönig).

Werner Schroeter received prominent awards for many of his films, in particular the epics Neapolitan Siblings (Neapolitanische Geschwister, 1978), Palermo or Wolfsburg (Palermo oder Wolfsburg, 1980) and the phantasmagoria Malina (1991), after Ingeborg Bachmann's novel of the same name. His final film, This Night, based on a story by Juan Carlos Onetti, was made in Portugal in 2008. Werner Schroeter died of cancer in Kassel on 10 April 2010.