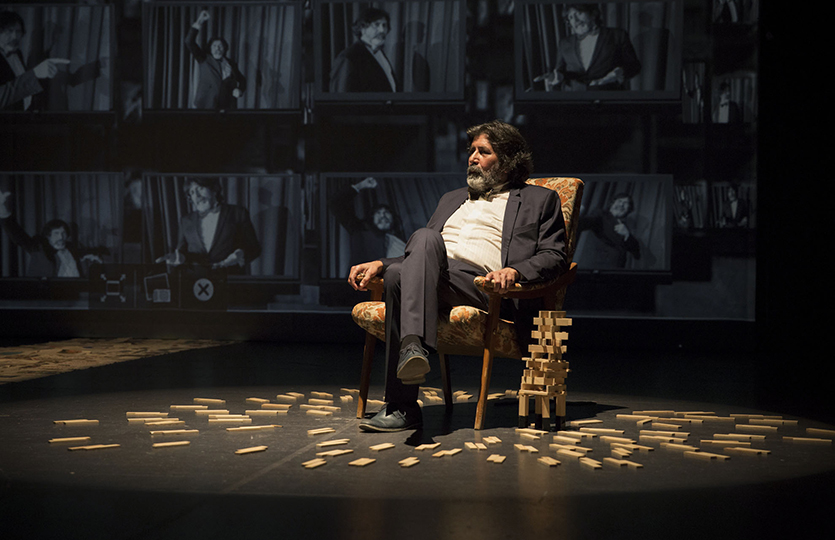 This theatre monologue, subtitled Oder eine Rede über Manipulation, was written by Tunisian playwright, director and lawyer Meriam Bousselmi during her time as a fellow at the Akademie der Künste in 2013/14. In Was der Diktator nicht gesagt hat, she allows a fictive dictator to speak, explaining his strategies for influence and the misuse of power. Yet as he talks, it always remains clear that he does nothing else than fill the void which his people have lain at his feet. Ranging from the animal kingdom to Napoleon and the Arab Spring, the monologue offers a reflection on the nature of temptation and responsibility, and the usefulness of hierarchies.

Together with Tunisian actor and theatre scholar Lassaad Jamoussi, director of the Carthage Theatre Days festival, Meriam Bousselmi staged her play this year as a Tunisian production in Belgium. In the Akademie, it is performed in French with German surtitles based on Frank Weigand’s translation.

After the performance, Meriam Bousselmi and Lassaad Jamoussi discuss the Carthage Declaration on the Protection of Artists in Vulnerable Situation they initiated in Tunis and hope to present to the United Nations.

In cooperation with the Berlin Artists-in-Residence-Programme of DAAD.

Followed by discussion (in English language)