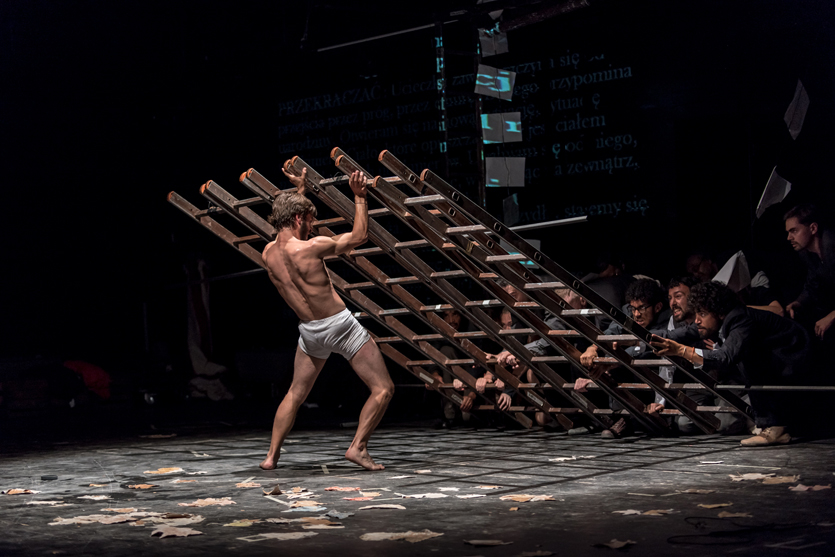 To cross. To undress. To crowd. To cling. To dodge. To domesticate oneself. To mask. To fall. How does escape take place? What are its recurring features? Are there tricks and tactics that both men and animals share when a predator chases them? The intention is to map the images of an escape, to build an atlas that could, by means of comparison, generate unforeseen constellations of meanings. What reciprocal insights may emerge from juxtaposing a mole’s disappearance into its hole and the strategy of a prisoner who digs a tunnel to escape the camp?

After dozens of interviews we chose some of the pictures of escape and linked them with worlds otherwise far apart: witnesses of WWII, today’s stories of refugees crossing Europe, an animal’s perception of the world, the world of art and literature. Finally, we channelled them into the bodies of actors and their relation with the elements of their scene.
A very physical production came out of it. During the play,a company of 12 actors, many of whom were refugees, together with an ensemble of eight musicians, and a singer question themselves about how their bodies react when the only way to save one's life is to become an acrobat,
They examine what art and music can do to counter extreme living conditions and, finally, to what extent a terrible past of persecution across Europe is likely to happen again. (Pietro Floridia, Cantieri Meticci)

Cantieri Meticci have been working with migrants and refugees since 2005. Acrobats ...or the art of escape was developed as part of the European History Atlas Under Construction.