The art of engineering between technology and aesthetics 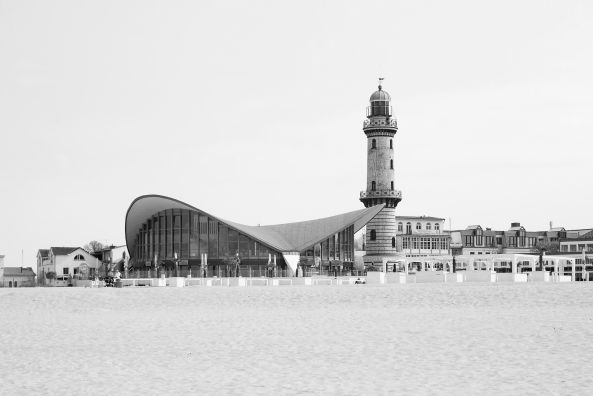 Over the next three years, the Hochschule Wismar – University of Applied Sciences and the Architecture Archives of the Akademie der Künste Berlin are cooperating on a project to index the personal papers of the leading architect and engineer Ulrich Müther. His work is being made available to the public under the project series  Networking – Developing – Researching. Alliance for University Collections funded by the Federal Ministry of Education and Research (BMBF).

Ulrich Müther is regarded as one of the most individual and outstanding architectural engineers working in the area of poured-concrete hypershell constructions in the former East Germany.  In Mecklenburg-Vorpommern, his best-known works include the Teepott (Teapot) guesthouse in Warnemünde as well as a lifeguard rescue station in Binz on the island of Rügen. Although Müther largely designed buildings on the Baltic coast, he also constructed some buildings in Berlin, including the Ahornblatt Restaurant. With its elegance and lightness of form, his designs contrast sharply with the uniformity often characterising GDR construction and symbolise an individual and richly experimental architecture in East Germany, still often ignored even today.

After training as a carpenter, Müther studied Structural Engineering at the Ingenieurschule für Bauwesen in Neustrelitz and later at the TU Dresden. Very early on, he specialised in the construction of hyberbolic paraboloids, the topic he selected for his degree thesis. Later, he took over his family construction company on the island of Rügen, and realised many poured-concrete hypershell projects. Shortly after the fall of the Wall, though, his work was largely forgotten. Many of his buildings were left to decay, some even demolished. It is, thus, even more important that his architectural oeuvre now receives special attention,

Since 2006, Ulrich Müther’s architectural and personal papers have been kept at the Hochschule Wismar. The process of appraising the Müther Archive is supported by the Architecture Archives of the Akademie der Künste, which has many years of experience in preserving, indexing and presenting the treasures of architectural history. The Akademie der Künste Berlin will also provide the Hochschule Wismar with assistance in evaluating the condition of the holdings and implementing the conservational measures necessary.