A puro chanfle is a work laden with football resonances (chanfle is a word used in Mexico to describe an artful and magical kick of the ball). The composer offer the following images: “Children play with a ball in a patio. A dog barks, irked at the unreachable iguana that slithers across the top of a wall. Dazzled by the tropical heat, my eyes sink into my head and, while I hear the constant bouncing of the ball, I try to remain awake in order to watch the final minutes of a Chivas-Pumas football match on TV. But the sounds of the melted afternoon around me create a strange mixture in my head. I dream of goals and chants, memory grains that swirl like impacts and spheres on the horizon.”

Concerning Swell, Navarrete remarks that “I employed the interval sequence of the first page of James Tenney’s Seegersong no. 2 for flute; I increased the duration and harmonic content of each note thanks to a process of multiplication, fragmentation and combination that I developed based on a sculpture by Tom Friedman.”

Russek explains that Cubo 2 (Cube 2) is based on the Mesoamerican creation myth of the Fifth Sun. The work employs “samples of Precolumbian instruments, which are processed and resynthesized in order to obtain the sound materials.” This is an 8-channel version of the original for 24 channels. 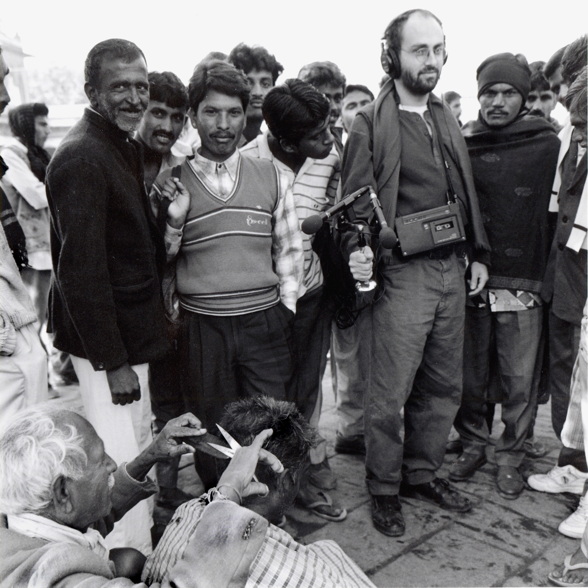 The central theme of Casi nada (Almost Nothing) is, according to Rocha, “the virtual and metaphorical recreation of soundscapes that we can clearly distinguish—albeit from afar—coming through a window into a room in our house or at a park far removed from noisy streets. The idea is to replace the common elements of a soundscape with instrumental and electronic sounds but also with concrete everyday sounds, such as dishes being washed, a closing door or a passing car. In this way, three sound worlds intermingle, recreating interesting structures of soundscapes whose possibilities of actually being heard are… almost nothing. They interact and offer a new and sophisticated world in which the timbrical richness is greater than in the real world—a kind of hyper-reality.”

Franco comments on his Devorar al Saturno (Devour the Saturn) by way of this quote from Italo Calvino’s Under the Jaguar Sun: “Perhaps time has come to an end, the sun has grown weary of rising, Chronos dies of starvation for want of victims to devour, the ages and the seasons are turned upside down.”

The work Requiem was composed as the soundtrack of the audiovisual work by visual artist Emilio Chapela that bears the same title.

His work Fisuras (Fissures) employs sounds generated by feedback, distortion and interference systems, sounds generated by the friction between objects made of different materials and sounds generated entirely on the computer. Castaños points out that “on previous occasions, my use of a computer had been closely linked to instrumental music and, more recently, to visual arts projects. With this work I have tried for the first time to explore the possibilities of creating a sound discourse wholly through the use of an electronic medium.”

His work Neuma was created with synthesis processes applied to voice recordings by means of SuperCollider. López remarks that “the name of the work refers to the act of breathing, which represents the work’s poetic and material trigger.” Neuma’s digital processes show a clear inclination towards working with error, saturation, noise, and distortion.