The reopening of Villa Serpentara in Olevano

Just a month after the Berlin Wall was built, the Akademie der Künste opened an artists’ residence in a town in the mountains of central Italy, and has been awarding fellowships there ever since. With this programme, the Akademie is carrying on the tradition of sending artists to study in Italy and, in the process, is also making an important contribution to furthering international cultural exchange.
“You know this place”, sculptor Hubertus von Pilgrim thought to himself as he gazed across the sweeping central Italian landscape from the terrace of Villa Serpentara in Olevano. At the invitation of the Akademie der Künste (West), the young artist had come to Olevano Romano with his family for the first time to spend several months there as a fellow in autumn 1961. While he had never been there before, his déjà vu experience was a product of his knowledge of landscape painting. In the early 19th century, this region, considered to be the embodiment of the ideal landscape, was discovered by artists from various European countries. Romantic artists, from Joseph Anton Koch to Franz Theobald Horny and Julius Schnorr von Carolsfeld to Carl Blechen, had visited the oak grove, the Serpentara (grove of snakes), to draw and paint in watercolours and oils. Hubertus von Pilgrim had previously encountered this landscape now stretched out before him, bathed in its unique light, while visiting the Kurpfälzisches Museum in Heidelberg. He had since become part of the continuation of an artist tradition under quite different circumstances – in the shadow of the Berlin Wall – with a new conception of landscape. As the now 90-year-old sculptor recalls, they lived much as the Romantics did, very spartanly, without electricity or running water. The scorpions found in the area have even made their way into his copperplate engravings as a theme.

An initiative by German artists in 1873 made it possible to preserve “The Serpentara”, expand it as an artists’ refuge and finally turn it into a branch of the Akademie der Künste. A group of artists associated with Karlsruhe landscape painter Edmund Kanoldt prevented the impending clearing of the oak forest by spontaneously raising funds to save it – today, such an effort would likely be called crowdfunding. After a few months, the required sum of 2,350 lire had been raised and ownership of the hilly plot of land with its 98 oak trees was transferred to the artists. In order to secure the property for the future, they donated it to the German Emperor; as property of the Empire, it was placed under the protectorship of the Royal Prussian Academy of Arts in Berlin. Beginning in the 1890s, management of the site was entrusted to Kassel-born sculptor and long-time resident of Rome, Heinrich Gerhardt. After the Imperial Embassy in Rome forbade the development of the property, he purchased a plot of land immediately adjacent to the oak grove on his own initiative and built a house with artist studios. The Academy of Arts sent its First Permanent Secretary Ludwig Justi to the opening on 3 June 1906. Heinrich Gerhardt finally bequeathed the property and villa to the Academy, which took ownership of the property after his death in 1915. Since then, the Akademie has been sending artists to Olevano for work-study residencies, interrupted only by the First and Second World Wars.

In 1945, Villa Serpentara was confiscated by the Allies along with the other German properties and institutions in Italy. Protracted restitution negotiations began in the 1950s and centred around the disputed legal succession of the Prussian Academy of Arts regarding Villa Serpentara and Villa Massimo in Rome. In 1956, a definitive solution was found: The bilateral cultural agreement signed between the Federal Republic of Germany and Italy led to the return of the villa. In subsequent years, the dilapidated house was inspected and underwent makeshift repairs. Rome-based lawyer, Dr Erich Bendheim, who had already led the restitution negotiations, became indispensable as a committed on-site administrator. According to the wishes of the Akademie and the Berlin Senate for National Education, starting in autumn 1961, the villa was finally to serve as an artists’ residence once again. Those wishes initially faced obstacles, however, which included not only the Akademie’s financial situation and the uncertain political circumstances, but also the questionable structural integrity of the building itself, the overgrown oak grove and urgently needed “maintenance work”. In early summer 1961, Maria von Buttlar, wife of the Secretary-General of the Akademie der Künste, Herbert von Buttlar, assumed responsibility for the villa on behalf of the Akademie. She managed “in admirable fashion” to secure the “temporary habitability” of the villa, procuring furniture, negotiating with local companies and authorities and finally moving into the villa with her three sons for a trial residence. On 13 September 1961, Villa Serpentara was officially opened – “in most basic form” at the request of the foreign office leadership – in the presence of the German ambassador and representatives of cultural institutions in Rome. Since then, the Akademie der Künste has been awarding fellowships for artists to stay in Olevano. 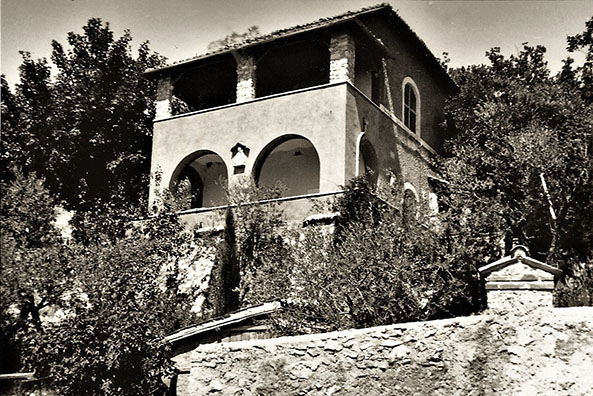 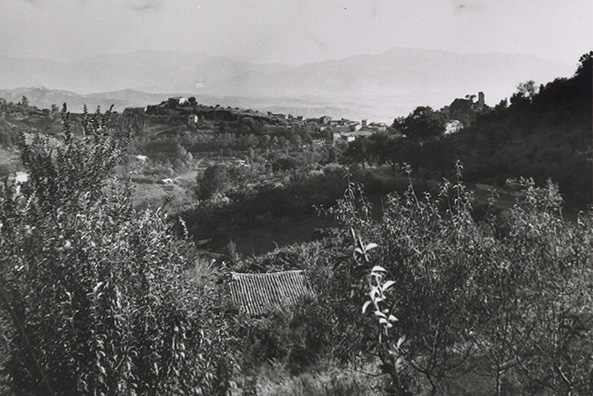 View from the terrace of Olevano, 1961. Photo © Adrian von Buttlar

View from the terrace of Olevano, 1961. Photo © Adrian von Buttlar 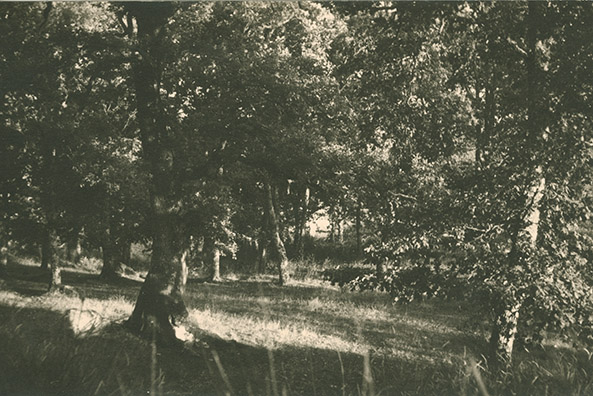 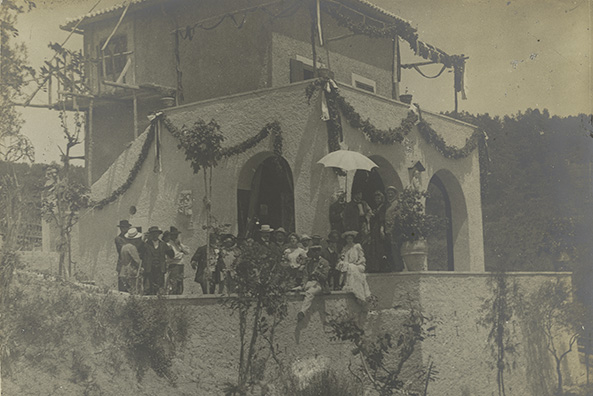 Inauguration of the new building with celebratory gathering, 1906. Unknown photographer

Inauguration of the new building with celebratory gathering, 1906. Unknown photographer 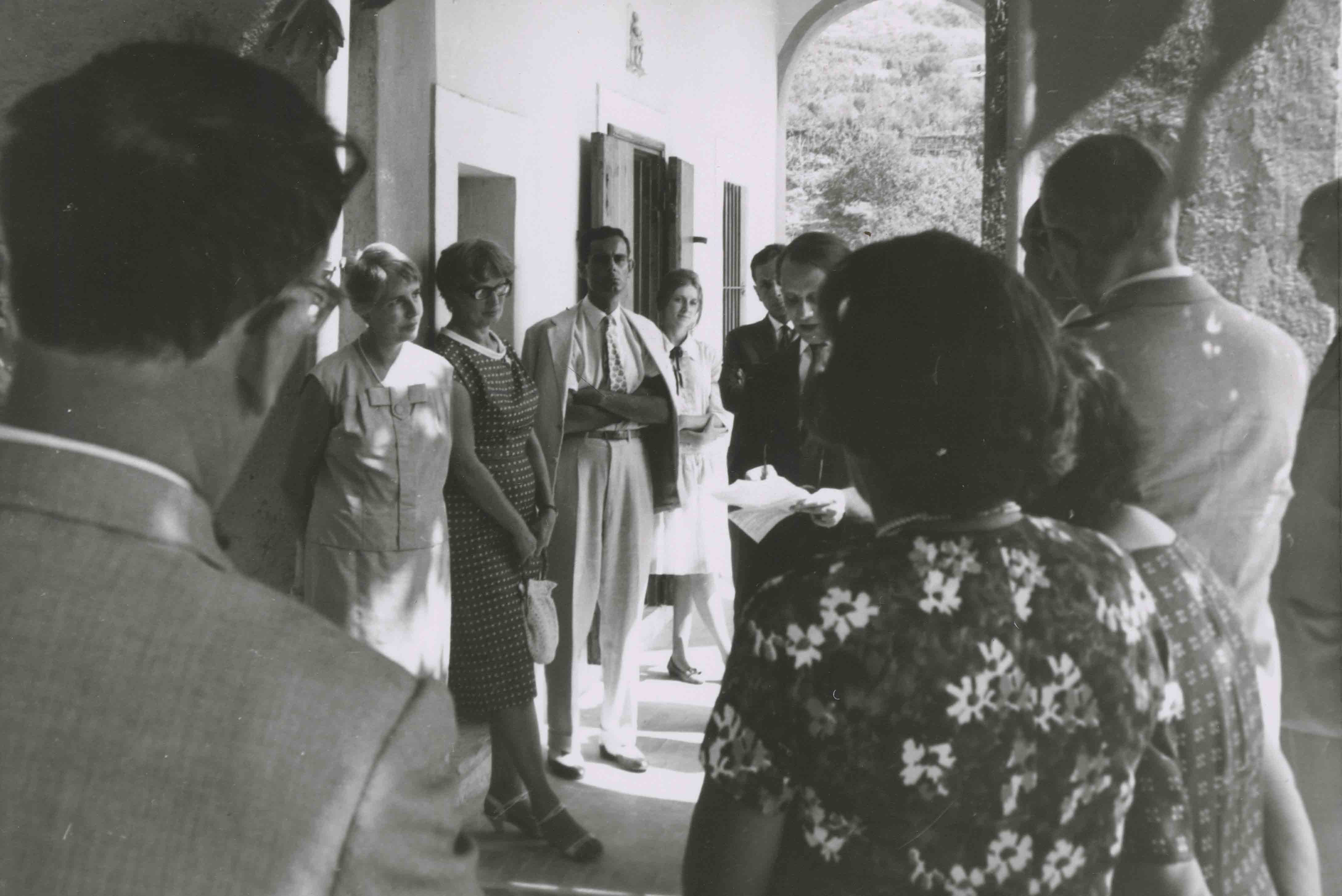 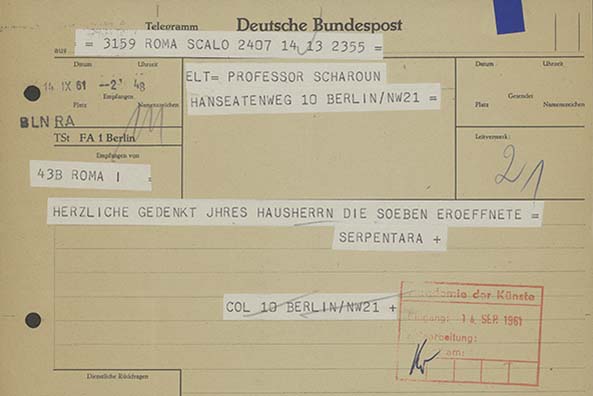 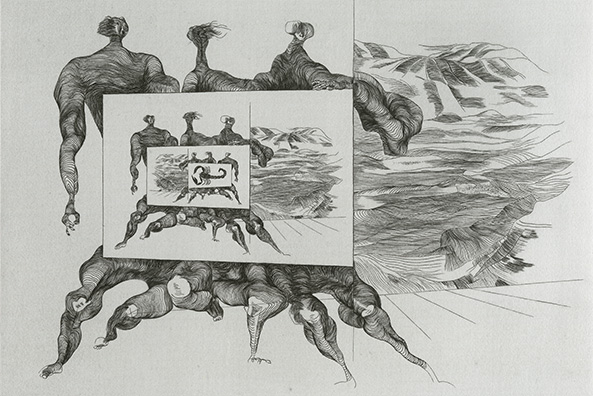 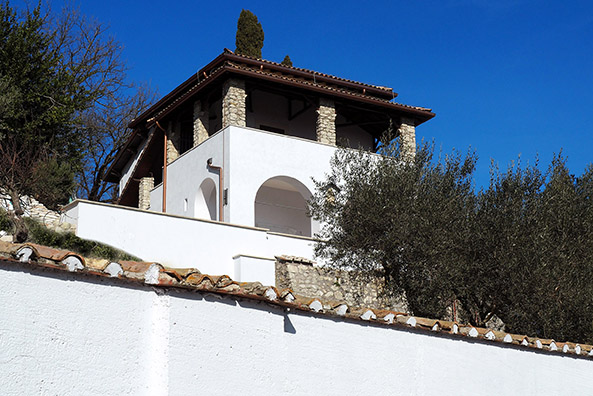