Between tradition and modernity

The reconstitution of the Akademie der Künste in West Berlin

With its claim to continuing the tradition of the Prussian Academy of Arts, the Akademie der Künste (West) took on a legacy that also came with a burden. During the National Socialist era, the Prussian Academy had quickly subordinated itself to the regime and in the process relinquished any cultural-political significance. 41 of its members had been excluded or were forced to leave the institution because of their political views or Jewish background. The Academy building on Pariser Platz, which served as the headquarters for Albert Speer’s General Building Inspection Authority from 1937, was largely destroyed in the final days of the war.

Beginning in May 1945, members of the Prussian Academy of Arts, led by the former Vice President Georg Schumann, attempted to reactivate the institution. They faced resistance from a movement spearheaded by Karl Hofer that supported a de-nazification of the old Academy. The initiative lost momentum after the sudden death of Alexander von Amersdorffer, the first permanent secretary of the Academy, in 1946, who had coordinated efforts. This was compounded by the cementing of the division of Berlin. The discussion was not taken up again until the Deutsche Akademie der Künste constituted itself in East Berlin. The political stakeholders in West Berlin declared that the East German Akademie had no right to carry on the tradition of the Prussian Academy of Arts, and called on all former members to refrain from participating in the institution. In 1949, the Berlin city administration appointed a Preparatory Committee for the new constitution of the former Prussian Academy; the committee drafted preliminary statutes and began discussing suitable members. In the meantime, the calls for a single, unified German Academy that had been made as recently as 1946 had subsided. This was added to by the fact that the existing academies in Darmstadt, Hamburg, Mainz and Munich left no room for such national representation.

On 2 December 1954, the West Berlin House of Representatives adopted the Law on the Establishment of the Akademie der Künste. For the first time in the history of the Akademie, a democratically legitimised body decided on the organisation, internal structure and mission of the community of artists. The law formulated the claim to continue the tradition of the Prussian Academy and emphasised the Akademie’s autonomy from the state. The law also anchored the mission of “promoting all areas of art and representing them in the public sphere as well as advising the state in important matters relating to art". The Architecture and Performing Arts Sections were newly established, too. Its official name was “Akademie der Künste, Sitz Berlin”. A villa on Musäusstraße in Dahlem served as the Akademie’s headquarters. Against the background of the political situation, the Akademie’s first president, architect Hans Scharoun, defined the Akademie as an “antithesis to the East German Akademie”.

Regarding the question of how to deal with former members of the Nazi Party (NSDAP) and those artists who were involved in the National Socialist system, a compromise was reached under the leadership of the Senator for Education, Joachim Tiburtius. In a one-time act of state, 53 founding members were invited by Tiburtius to take part in the first preparatory General Assembly on 28 October 1955. On the one hand, they included composer Max Trapp, an ardent former member of the NSDAP, and emigrants Ludwig Berger, Ferdinand Bruckner, Ernst May and Hans Purrmann on the other. Since membership was tied to German citizenship, emigrants such as architect Martin Wagner, who resided in Istanbul, could not be accepted as founding members. Nevertheless, the first secretary-general, Herbert von Buttlar, made great efforts to secure the return of artists who had emigrated before and during the war.

Regardless of state directives, the members and the president shaped the profile of the Akademie, facilitated the institution’s new beginning and its charted course into the modern era. Starting in 1960, thanks to the new building donated by Henry H. Reichhold and designed by the architect Werner Düttmann, which was built on Hanseatenweg in Tiergarten, the Akademie der Künste (West) was able to continue its dedicated cultural programme at its own premises. 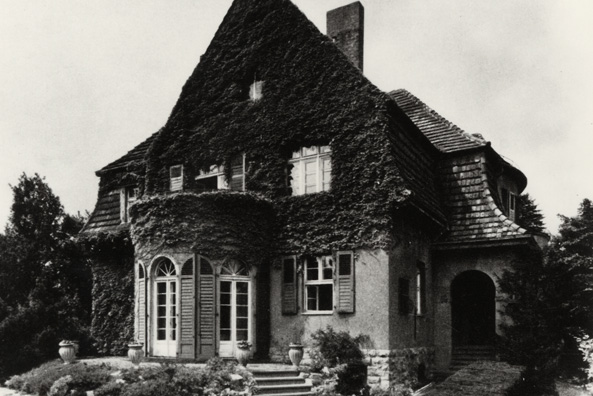 Home of the Akademie der Künste (West) from 1955 to 1960 in Berlin’s Dahlem district, Musäusstraße 8. Photo: unknown

Home of the Akademie der Künste (West) from 1955 to 1960 in Berlin’s Dahlem district, Musäusstraße 8. Photo: unknown 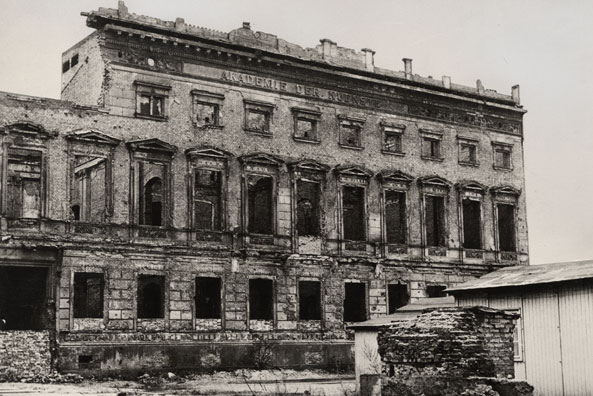 Ruins of the Prussian Academy of Arts on Pariser Platz, 1946. Photo: Karl-Heinz Holzhausen

Ruins of the Prussian Academy of Arts on Pariser Platz, 1946. Photo: Karl-Heinz Holzhausen 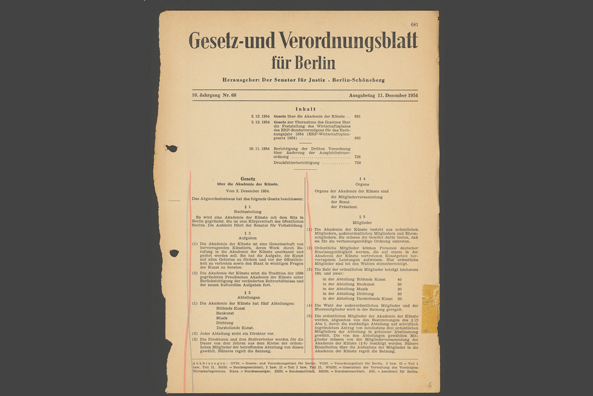 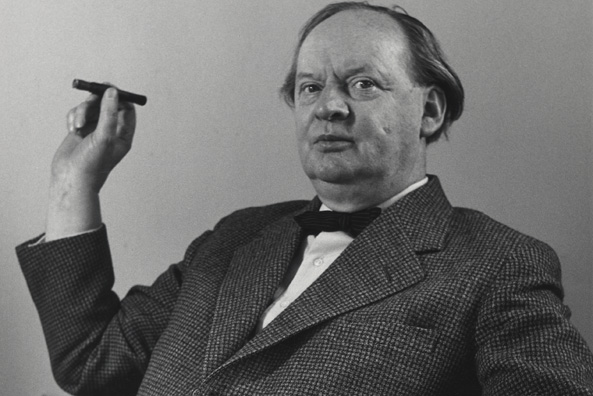 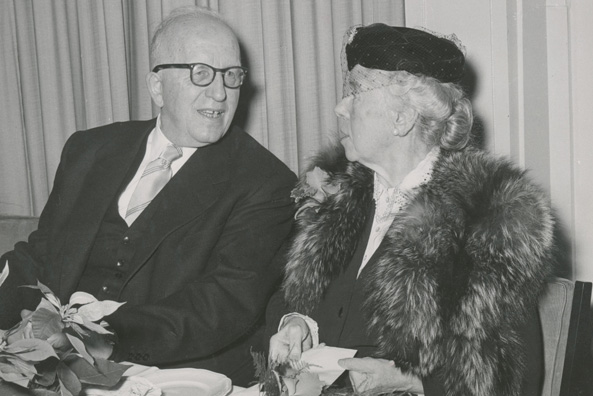 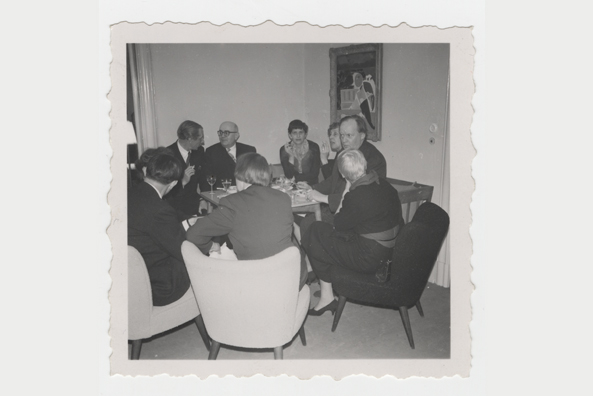 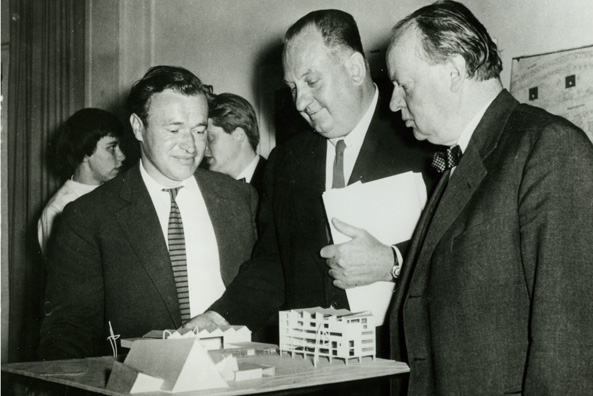 Werner Düttmann, Henry H. Reichhold and Hans Scharoun (from left) at the press conference to present the model of the new building on Hanseatenweg, 1958. Photo: Marie-Agnes Gräfin zu Dohna

Werner Düttmann, Henry H. Reichhold and Hans Scharoun (from left) at the press conference to present the model of the new building on Hanseatenweg, 1958. Photo: Marie-Agnes Gräfin zu Dohna