The East German uprising of 17 June 1953, the Akademie and Brecht

“What can the Deutsche Akademie der Künste do to intervene in the current situation?”

It cannot be said that the Akademie failed to respond on that fateful day. The sole item on the agenda for an improvised executive meeting that afternoon was: “What can the Deutsche Akademie der Künste do to intervene in the current situation?”

The shock was palpable. “For several hours, until the occupation of the Munitions factories, Berlin was on the brink of a third world war,” stated Bertolt Brecht. There were, however, differing ideas about how to intervene. Brecht rejected the suggestion to “write a manifesto as a declaration of loyalty to the government and a contribution to the restoration of order.” First, he wanted to hear the government’s assessment of the situation. According to Brecht, one possibility was for “individual personalities to come forward on their own accord in an original, honest and visible manner in order to make their presence felt by taking an active role on the radio, which at the moment is the most effective mass medium.”

Brecht had thereby formulated his strategy. On the afternoon of 16 June, after hearing about the workers’ uprising, he arrived in Berlin from Buckow. On 17 June, he watched the demonstrations on Unter den Linden, discussed the situation at the Berliner Ensemble and the Akademie and tried to exert his influence by writing to Walter Ulbricht, Otto Grotewohl and the Soviet ambassador Vladimir Semyonovich Semyonov. In particular, his efforts focused on the medium of radio. His offer to have members of the Berliner Ensemble speak on the air was ignored. Unaffected by the events that were unfolding, this most important mass medium of the time was playing music as light entertainment.

Three further Akademie meetings held that month focused on the demands to reform cultural policy, which had some degree of success. “The state […] should not, as has been the case so far, intervene, throttle and suppress,” declared Brecht. Even if only for a short time, the administrative influences were sidelined.

At the Akademie, the causes of the uprising seem to have been downplayed. Given the casualties of the uprising, one would hope that the position taken by Director Rudolf Engel was not shared by all members: “This attempt to carry out a fascist coup has been nipped in the bud, without bloodshed, by the resolute intervention of the Soviet occupation forces.”

Brecht also saw “organised fascist elements” at work. At the same time, he spoke of the workers having “demonstrated in justified discontent”, and called for “major dialogue”. The salvation of the East German experiment was paramount.

The lasting impression is ambiguous: At the moment of peril, an academy was busy patronising the arts. And Brecht? He recognised the extraordinary nature of this political crisis. Publicly, his strategy was to show critical solidarity, which would eventually have negative consequences for him. In private, he shared his Buckow Elegies with confidants, which contained a mocking verse stating that the government should dissolve the people; it also, however, contains the poem Böser Morgen (A bad morning), which expresses the poet’s distress and the notion that current events were threatening his life’s work: “Last night in a dream I saw fingers pointing at me / As though at a leper. They were worn by work and / They were broken.”

In a resume of that summer, Brecht noted in his journal: “17th June has alienated the whole of existence.” At the same time, he did not see “the terrible 17th June simply just negative”. Instead, the workers’ demonstrations had shown in all their “lack of direction” and “pathetic helplessness […] that this is the rising class.”

But was this rising class really his audience, the subject of his drama? More than anything else, 17 June not only stands for the chasm between the government of the workers’ and farmers’ state and the workers and farmers themselves, but also for a significant alienation between the Akademie and the people on the street. 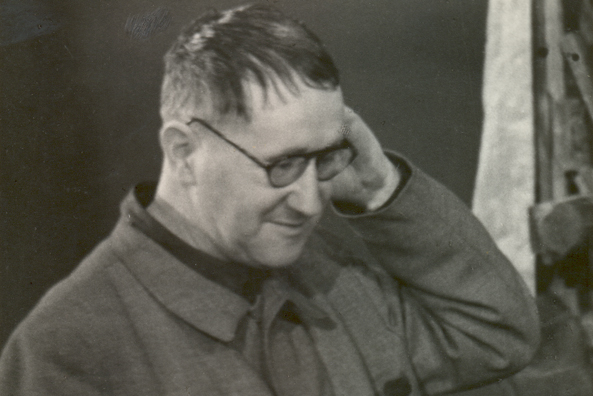 Bertolt Brecht at a rehearsal for the resumption of the play Mutter Courage und ihre Kinder (Mother Courage and her Children), Deutsches Theater, Berlin 1951. 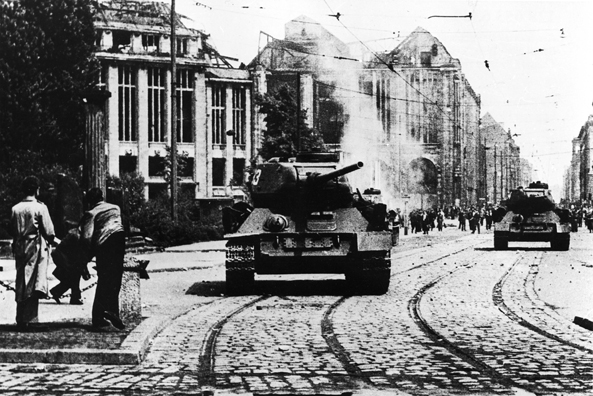 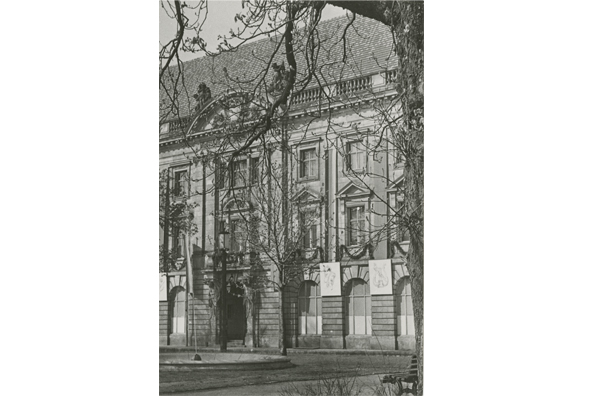 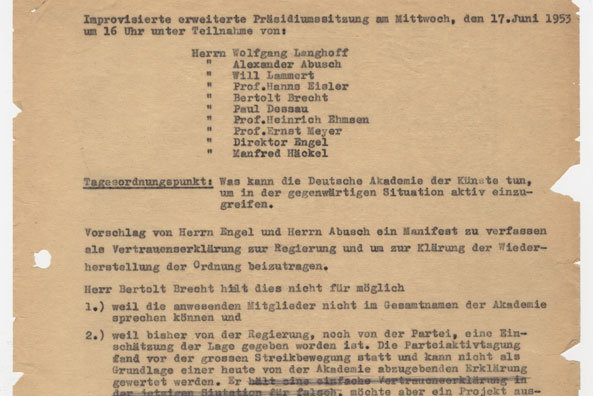 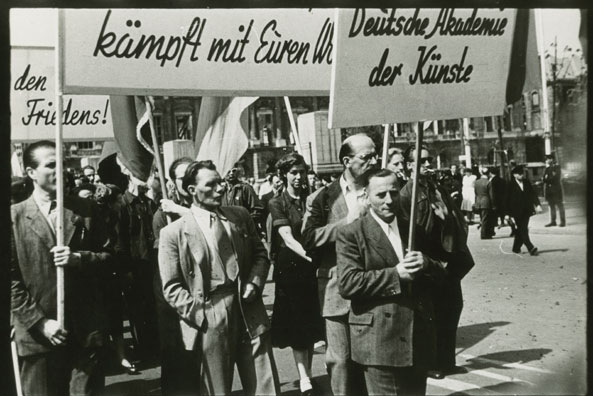 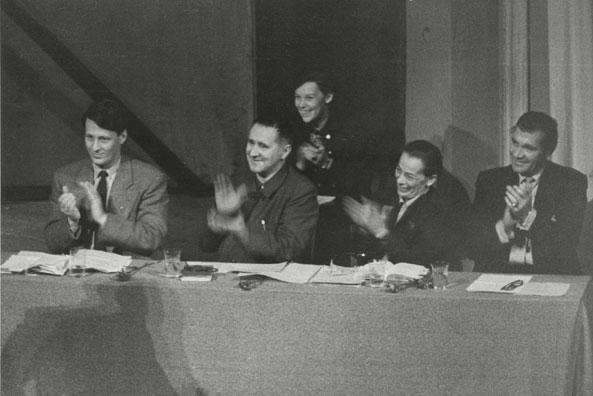 Bertolt Brecht (second from left) at the event held by Akademie members to commemorate the October Revolution at the Berliner Ensemble, 7 Nov. 1954. 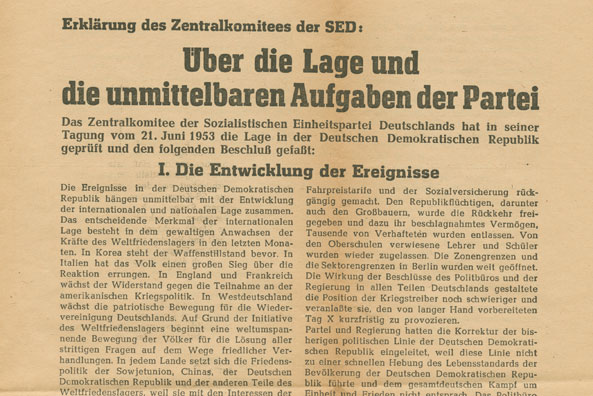